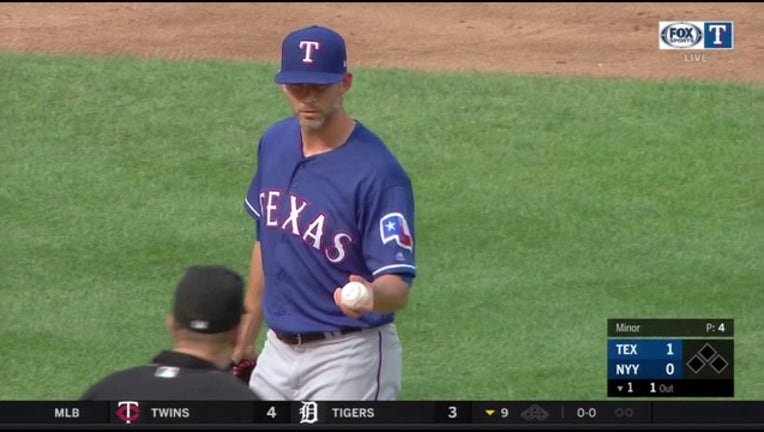 The Yankees had the second-longest streak without being blanked since at least 1900 behind a 308-game stretch by the Babe Ruth-led Yankees from 1931-33. New York was previously shut out June 30, 2018, by Chris Sale and the Red Sox.

Jose Trevino, Delino DeShields and Shin-Soo Choo homered to back Minor (12-8), who allowed five hits over 7 1/3 innings. The left-hander struck out five, walked one and threw 111 pitches before being pulled with two on in the eighth.

Shawn Kelley replaced Minor and retired DJ LeMahieu and Aaron Judge to end the eighth. Emmanuel Clase shut down the heart of the order in the ninth to stop New York's string of 220 straight games with a run.

The Yankees' scoring streak nearly fell Sunday when they trailed Oakland 4-0 after 7 1/2 innings, but New York rallied and won 5-4 on Mike Ford's game-ending solo homer in the ninth.

MILWAUKEE (AP) - George Springer's home run in the 10th inning, which followed a game-tying homer by Christian Yelich in the ninth, lifted Houston over Milwaukee.

With Houston leading 2-1, Yelich led off the ninth with his 43rd home run of the season, a solo shot on an 0-2 pitch from reliever Roberto Osuna (4-3).

Osuna later committed a throwing error that left runners at first and second. But he escaped with an inning-ending strikeout of pinch-hitter Travis Shaw.

Springer's own solo blast, his 30th of the season, came off reliever Junior Guerra (8-5) to start the 10th. Yordan Alvarez also homered for Houston.

The loss ended Washington's four-game winning streak and denied the Nationals from moving 20 games over .500 for the first time this season.

Syndergaard (10-7) allowed a leadoff single to Trea Turner, then retired the next 16 batters in his first start since yielding a career-high 10 runs against the Cubs on Wednesday. It was Syndergaard's third 10-strikeout performance of the season and the 17th of his career.

The Rays held their narrow lead atop the AL wild-card race.

Pham's third hit of the game came off Dillon Tate (0-1) after Joey Wendle walked with one out and moved up on a grounder. He also had a two-run double.

Colin Poche (4-4) pitched one inning for the win.

Austin Meadows hit his 25th homer, a two-run drive off Asher Wojciechowski, put the Rays up 2-0 in the third. Pham's double made it 4-0 in the fifth.

Trailing 3-2, Minnesota started the eighth with two singles off Buck Farmer (5-6). He retired the next two batters, but Ehire Adrianza's infield single loaded the bases for Kepler. Matt Hall relieved and Kepler lined his single to center field.

Zack Littell (3-0) got the win and Taylor Rogers worked a perfect ninth for his 22nd save.

Detroit's Miguel Cabrera hit a solo home run, his 10th, in the first. Adrianza put Minnesota ahead with a homer in the second.

Soroka (11-3) allowed three runs on five hits in five innings in his first win in three starts against Toronto. Mark Melancon threw a perfect ninth inning for his ninth save.

Harper extended his hitting and scoring streaks to 10 games.

Philadelphia starter Drew Smyly (3-6) tied his season high with eight strikeouts while earning his first win in six starts. He gave up four hits, one run and three walks in 5 1/3 innings.

Paul DeJong had an RBI single for the Cardinals, who have won 10 of 12. They stretched their lead over the Chicago Cubs in the NL Central 3½ games.

Wainwright (10-9) allowed four hits. He struck out one and did not walk a batter in a 96-pitch stint. Carlos Martínez picked up his 18th save in 21 chances.

Tyler Beede (3-9) gave up three runs on five hits over four innings. He struck out two and walked one.

Anthony Rizzo went 2 for 2 and drove in a run for Chicago, which remained 3½ games behind the St. Louis Cardinals in the NL Central.

The Mariners got their run off Kyle Hendricks in the fifth on back-to-back doubles with one out by Dylan Moore and Dee Gordon.

The Diamondbacks have won seven of eight. The Padres had won three of four.

Rojas also doubled and singled twice and Ketel Marte drove in four runs for the Diamondbacks.

A six-run second inning put the Diamondbacks comfortably ahead for good, helped by a wild pitch and throwing error. Rojas, Marte, pitcher Mike Leake and Nick Ahmed drove in runs in the inning.

Ty France hit a three-run homer for the Padres.

Leake (11-10) got through 6 1/3 innings and allowed four runs on eight hits for his first win at home with the Diamondbacks.

Santana hit his team-leading 32nd home run with one out in the sixth and had an RBI single in the seventh.

The Indians needed a boost after being swept in a three-game series at Tampa Bay. Cleveland trails Minnesota by 5 ½ games in the AL Central and is a half-game behind the Rays in the race for the first wild-card spot.

The White Sox have dropped seven straight - matching their longest streak of the season - and are a season-high 17 games under .500.