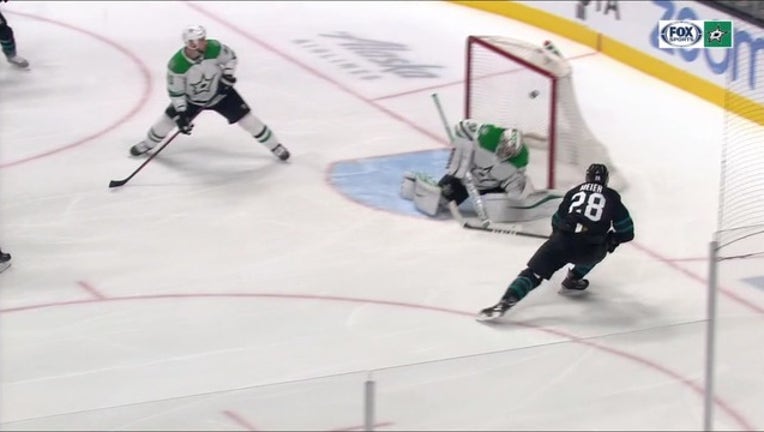 Meier's 17th and 18th goals sent the Sharks to their third straight win and fifth in six games. Meier has four goals in his last two games and 10 points (five goals, five assists) in his past six contests.

Joe Thornton also scored and Martin Jones made 20 saves for the Sharks.

San Jose prevented a three-game season series sweep by Dallas, which had won three straight and six of seven against the Sharks. Dallas has lost three straight overall after winning its previous four.

Meier scored at 2:50 of the third period to break a 1-all tie. Just more than five minutes later, the Sharks made it 3-1 on Thornton's fifth goal of the season.

Miro Heiskanen scored his seventh for Dallas with 7:36 left to make it 3-2.

Radek Faksa scored at 3:35 of the second to give the Stars a 1-0 lead. Faksa jumped on the rebound of Julius Honka's shot in front and put the puck past Jones for his fifth goal.

Meier tied it at 16:20 of the second, firing a shot from 5 feet inside the blue line through a crowd of players off a faceoff.

Stars goalie Anton Khudobin turned back 21 shots after going 5-1 with a 1.32 goals-against average in his previous six games against San Jose.

NOTES: Thornton was in the lineup after missing Wednesday's practice and Thursday's optional skate with an undisclosed injury. ... Couture has 11 points (two goals, nine assists) in his last nine games. . Stars D Gavin Bayreuther was a healthy scratch. . Stars C Marin Hanzal was a scratch after playing three straight games, his first action since undergoing spinal fusion surgery in April. . The Stars didn't hold a morning skate after playing in Anaheim on Wednesday night. . The Sharks had five shots on goal and the Stars three in the first period.

Sharks: Play at Chicago on Sunday.