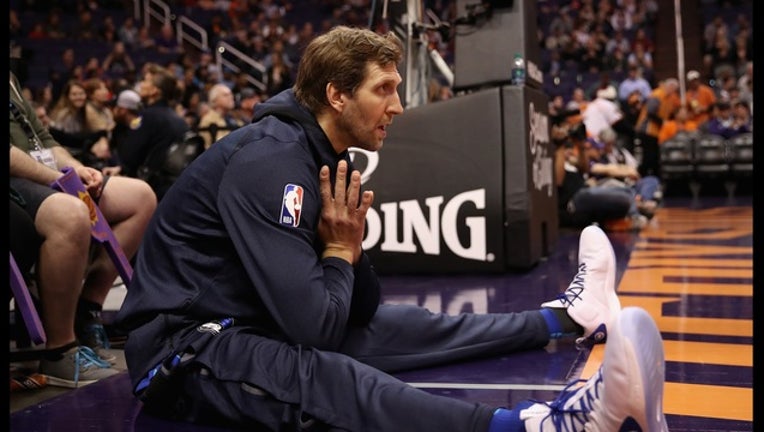 Dirk Nowitzki #41 of the Dallas Mavericks warms up on the sidelines during the first half of the NBA game against the Phoenix Suns at Talking Stick Resort Arena on December 13, 2018 in Phoenix, Arizona. (Photo by Christian Petersen/Getty Images)

PHOENIX (AP) - Dirk Nowitzki at last began his record-breaking 21st season with the Dallas Mavericks on Thursday night, coming off the bench in the first quarter against the Phoenix Suns.

No other NBA player has played that many seasons with the same team.

The 40-year-old had been tied at 20 seasons with Kobe Bryant, who retired from the Los Angeles Lakers after the 2015-16 season.

Nowitzki had surgery to remove bone spurs from his left ankle last April, and the timing was to make sure he would be ready at the start of this season. But the 7-foot German had a setback before training camp, with tendon soreness forcing him to continue rehabbing the injury and missing the first 26 games.

He made his first appearance in the lineup this season with 3:27 left in the opening quarter. A minute later, he banked in his first shot in his six-minute stint on the court.

The 2007 MVP said the slow pace of the rehab was to ensure Nowitzki wouldn't be sidelined again once he returns. The 13-time All-Star has been steadily ramping up his activity for several weeks.

Nowitzki, who led the Mavericks to their only championship as the NBA Finals MVP in 2011, took pride in playing 77 games last season as a 39-year-old. He hoped for a similar number in what could be his final season. Instead, it's been more like 2012-13, when he missed 27 games after preseason arthroscopic surgery on his right knee.

The highest-scoring foreign-born player, Nowitzki is seventh on the career list with 31,187 points. He was sixth to start the season before LeBron James passed him early. James is up to fifth, and Nowitzki needs 233 points to pass Wilt Chamberlain for sixth.

Nowitzki is expected to come off the bench for the first time since his rookie season in 1998-99. And he's teammates with the latest Euro sensation in 19-year-old Luka Doncic, the third overall pick and a strong contender for Rookie of the Year.