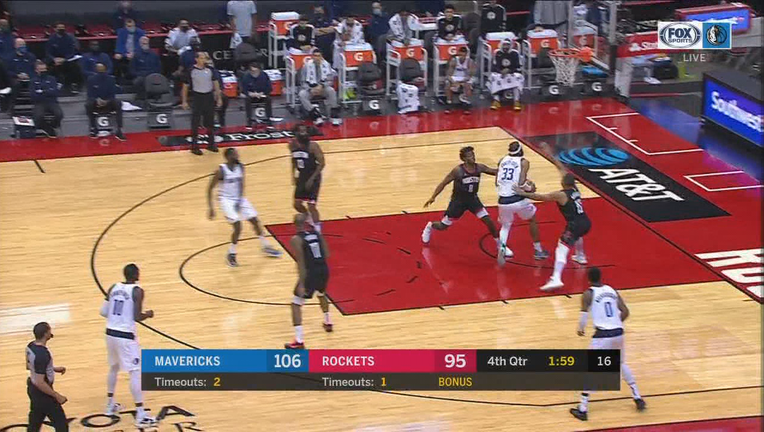 HOUSTON - Luka Doncic had 33 points, 16 rebounds and 11 assists, and Tim Hardaway Jr. added 30 off the bench as the Dallas Mavericks used a big fourth quarter run to pull away in a 113-100 win over the Houston Rockets on Monday night.

Houston couldn’t get anything going as the Mavericks took over. The Rockets missed five shots and had two turnovers in that span.

Hardaway, who made 8 of 10 3-point attempts, added another 3-pointer down the stretch to put the game out of reach.

Dallas coach Rick Carlisle changed his starting lineup to get more size against the Rockets and moved Willie Cauley-Stein, who is 7 feet tall, in for Hardaway for the first time this season.

Carlisle heaped praise upon Hardaway for the way he played off the bench.

"It was a really strong character performance by Tim," he said. "He was great at both ends of the floor... Tim Hardaway showed what class and professionalism is in responding to a lineup change."

Hardaway didn't feel like the move was that big of a deal.

"You’ve got to be a pro," he said. "I’m here to help this team out any way I can. I just had to make sure I was ready when I got in the game to make an impact."

Christian Wood had 23 points to lead the Rockets and James Harden added 21.

"We were way too stagnant, didn't move the ball enough to put pressure on them and make it hard on them," coach Stephen Silas said.

Both Doncic and Harden were back after sitting out in their team’s last game with injuries. Doncic returned after missing Sunday’s loss to Chicago with a bruised quadriceps. Harden played after sitting out on Saturday against the Kings because of a sprained ankle.

Carlisle was impressed that his team was able to slow Harden down and limit the Rockets to just 100 points.

"Defensively is where we’re going to make our ground this year," he said. "That’s just how it’s going to be. We’ve got to build on this somehow."

"I'm really just disappointed in our offensive effort tonight because that's not the game that I envisioned us playing," Silas said.

The Mavericks led by seven points to start the fourth before Houston opened the quarter with an 8-1 run to tie it with about 10 minutes remaining. Eric Gordon made three free throws to get things going and Sterling Brown had a 3 that tied it.

Dallas had a 16-point lead after a three-point play by Doncic with about eight minutes left in the third quarter. The Rockets then scored the next 14 points to get within 72-70 four minutes later. Harden had a step back 3-pointer in that stretch and Jae’Sean Tate capped it with six straight points.

Doncic struggled during that time, turning the ball over three times and receiving a technical foul.

The Mavericks finally ended a scoring drought with a 3-pointer by Hardaway with less than three minutes left in the quarter.

Another 3-pointer by Hardaway later in the third extended the lead to six points before Gordon hit a 3 for Houston. But Doncic scored the last four points of the quarter to put the Mavericks up 84-77 entering the fourth.

DeMarcus Cousins was ejected after receiving two technical fouls in about three minutes in the second quarter. The first one came when he and Cauley-Stein both got one after jawing at each other after fighting for a rebound.

Cousins was ejected when he yelled at an official after not getting a foul call after a layup with about nine minutes left in the first half. Silas was clearly unhappy with the call and stood inches away from a referee pointing and arguing about it for a couple of minutes before he was pushed away by Harden.

Mavericks: James Johnson received a flagrant-1 foul after hitting Tate in the face on a foul in the third quarter. ... Cauley-Stein added 15 points with seven rebounds.

Rockets: Danuel House missed the game with back spasms. ... Ben McLemore was available after sitting out the first four games while in isolation because of COVID-19 protocols but did not play.

Mavericks: Visit Denver on Thursday before returning home for games against Orlando and New Orleans this weekend.

Rockets: Visit the Pacers on Wednesday before returning home for three straight games, with the last two coming against the Lakers.