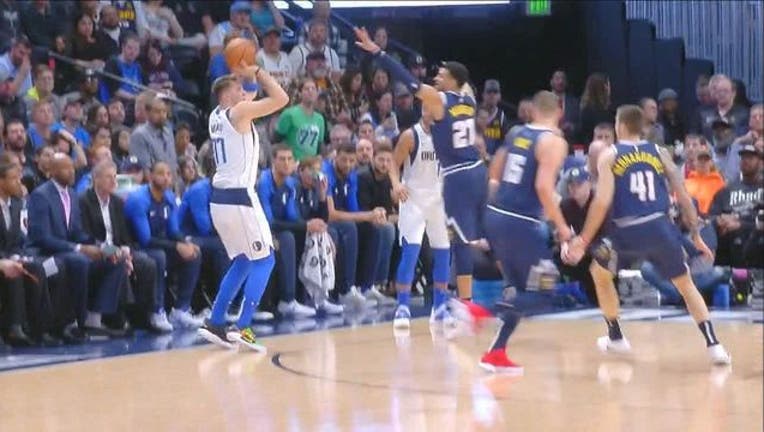 DENVER (AP) - Nikola Jokic had 32 points and 16 rebounds, Jamal Murray dished out a career-high 15 assists and the Denver Nuggets extended their home winning streak to seven games by beating the Dallas Mavericks 126-118 on Tuesday night.

At 21-9, the Nuggets matched the 1976-77 squad for the best start through 30 games in franchise history. They also remain on top of the Western Conference by percentage points over Golden State. This is rarefied air for the Nuggets: The last time they had played more than 25 games and were alone in first place in the conference was March 1977.

Murray contributed 22 points for the injury-depleted Nuggets, including 10 in the fourth quarter.

Luka Doncic had a big game for Dallas with 23 points and a career-best 12 assists, while Harrison Barnes scored 30. The Mavericks hit 15 3-pointers against the NBA's top long-range defense.

The Nuggets held each opponent under 100 points in their last six wins at the Pepsi Center. But this one turned into a track meet - a throwback to the days of old for Denver.

Still, it was a defensive play that helped save the night for the Nuggets.

Fueled by a 14-0 run at the end of the third, the Nuggets took a 105-95 lead into the final quarter. Dallas trimmed it to four before Monte Morris hit a 3-pointer to give Denver some separation.

Murray then blocked a shot and hit a jumper on the other end to seal the win.

The Nuggets remain without Will Barton, Gary Harris and Paul Millsap due to injuries. Juancho Hernangomez started despite being questionable with a strained abdomen. He finished with 12 points, one of seven Denver players to score in double figures.

Nuggets: Murray picked up a technical in the first quarter for hanging on the rim and coach Michael Malone another in the third when he argued a call on Jokic.

The most impressive thing about Doncic through the early portion of the season? That's easy for Carlisle.

Carlisle said Jokic is an anomaly in the way he can take over the game, but plays "close to the floor."

"It's one of the great things about the NBA game: Guys like him that have the size and skill and know how to use leverage and angles, their vision and senses can be All-Star-caliber players. He is that."

Mavericks: Second of a four-game trip will be Thursday at the Los Angeles Clippers.

Nuggets: Two straight on the road, beginning Saturday in Los Angeles against the Clippers.