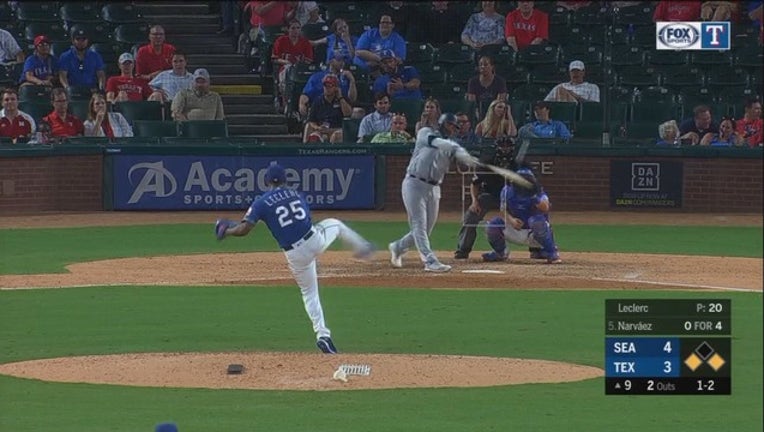 ARLINGTON, Texas (AP) - The Seattle Mariners typically look to the long ball. On Thursday night against Texas, it was small ball that delivered big results.

Austin Nola hit a sacrifice fly that scored Dee Gordon with the tiebreaking run in the top of the ninth inning and Omar Narváez added an insurance run with an RBI single as the Mariners snapped a three-game losing streak with a 5-3 win over the Rangers.

Seattle entered the game tied for fourth place in the American League in home runs with 211.

Gordon led off the ninth with a single to right, stole second before Mallex Smith walked and then advanced to third on a sacrifice bunt by J.P. Crawford. Nola's fly out scored Gordon and Narváez's single to shallow center scored Smith.

"Really, really good inning for the team there," Mariners manager Scott Servais, "and that's what you've got to do late in games."

Matt Magill (4-1) allowed one base runner in the eighth and ninth innings.

José Leclerc (2-4) allowed both runs in the ninth inning on two singles and two walks. The Rangers lost for the fifth time in seven games.

Willie Calhoun homered in the first inning off the facing of the second deck in right field. Calhoun has hit five of Texas' last nine home runs over 10 games. The Rangers' offense is missing sluggers Joey Gallo, Hunter Pence and Nomar Mazara, all on the injured list.

"We've got to come up with ways to get runners across and create some more runs other than just home runs," Texas manager Chris Woodward said.

Félix Hernández came away with his second straight no decision after missing more than three months with a lat strain. Hernández allowed all three runs on five hits and struck out three.

Hernández made his final start at Globe Life Park, where he leads all opposing pitchers in starts (28), innings (164) and strikeouts (133). The Mariners' all-time leader in wins and strikeouts, the 33-year-old Hernández will be a free agent next season.

"My goal is to finish strong if I want to play baseball next year," he said.

Lance Lynn gave up three runs, one earned, in six innings. He struck out five, raising his season total to 202 and becoming the eighth pitcher in Texas club history to strike out 200 or more in a season.

Seattle scored three runs in the second inning beginning with Lynn hitting Dylan Moore on the left elbow with the bases loaded. Two runs scored when Rangers first baseman Logan Forsythe dropped a throw on a double play try on a ground ball hit by Gordon that would have ended the inning.

The Rangers scored a run in the fourth inning when Scott Heineman nearly hit into a triple play. Heineman hit a ground ball to third with the bases loaded. Kyle Seager stepped on the bag and threw to Gordon at second for the second out. Gordon's relay to first was just late, allowing Nick Solak to score.

"Oh, that was so close," Hernández said of the near triple play.

NO BREAKS FOR ODOR

Rangers 2B Rougned Odor went 0 for 3 with a walk to extend his hitless streak to 28 at-bats. His final out was a ninth-inning liner pulled to short right field into the shift and caught by a diving Mariners 2B Dee Gordon.

"You just have to stay focused and don't get crazy," Odor said.

Smith stole his major league-leading 37th base in the fifth inning, diving beneath a tag by Rangers 2B Rougned Odor. Texas challenged the call, which stood after a delay of more than 90 seconds. ... Rangers rookie DH Nick Solak, with two singles, has hit safely in eight of his 10 big league games and has reached base in all 10.

Mariners left-hander Marco Gonzales (14-10, 4.17) will make his 29th start, equaling his career high, and needs to last only three innings to set a career high for innings. Gonzales is 2-2 against Texas this season.

Rangers right-hander Kolby Allard (2-0, 4.64) comes off 6 1/3 shutout innings against the White Sox last Saturday during which he struck out eight and walked none.