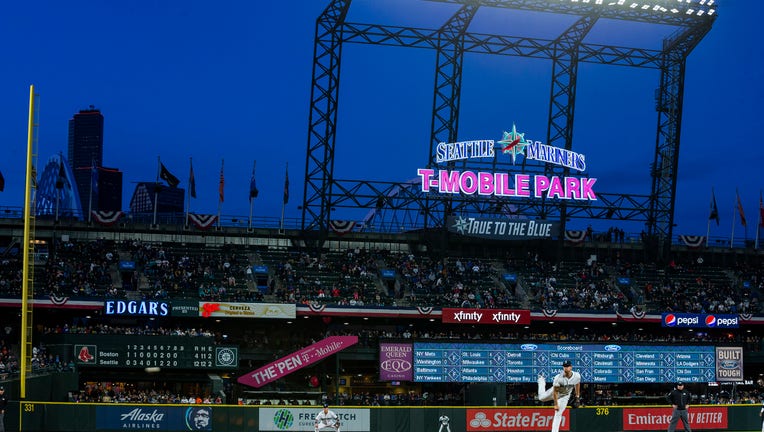 A general view of T-Mobile Park as seen during a Seattle Mariners game on March 28, 2019 in Seattle, Washington. (Photo by Ben VanHouten/Seattle Mariners)

ARLINGTON, Texas - The Seattle Mariners have canceled all home games through the end of March, including four games against the Texas Rangers, due to the worsening coronavirus outbreak in the Seattle area.

The Rangers and Mariners were scheduled to open the season against each other at T-Mobile Park in Seattle on March 26-29.

Both the Rangers and Mariners said they were working with Major League Baseball on “alternate plans” for the scheduling of the games.

“We will provide more information about the plans for this series as it becomes available,” the Rangers said in a statement.

Washington state's governor announced a ban on gatherings of more than 250 people in virtually the entire Seattle metro area Wednesday to try to stop the spread of the coronavirus in the state where at least 24 people have died.

The directive from Gov. Jay Inslee encompasses 4 million people and does not affect workplaces or classrooms but applies to such events as Mariners games.

Washington is the home of the biggest cluster of coronavirus deaths in the U.S. Nineteen of them have been linked to a single suburban Seattle nursing home, and authorities in Seattle's King County have said the virus has spread to at least 10 such facilities. The elderly and the sick are especially vulnerable to the disease.

"This is not just your ordinary flu," Inslee said. "This demands a response consistent with the nature of the threat."

The order, which will remain in effect through at least the end of the month, came as political leaders around the country scrambled to ban or discourage public gatherings, a rapidly expanding list of universities moved their classes online, and the U.S. government's top infectious-disease expert warned that the worst is yet to come.