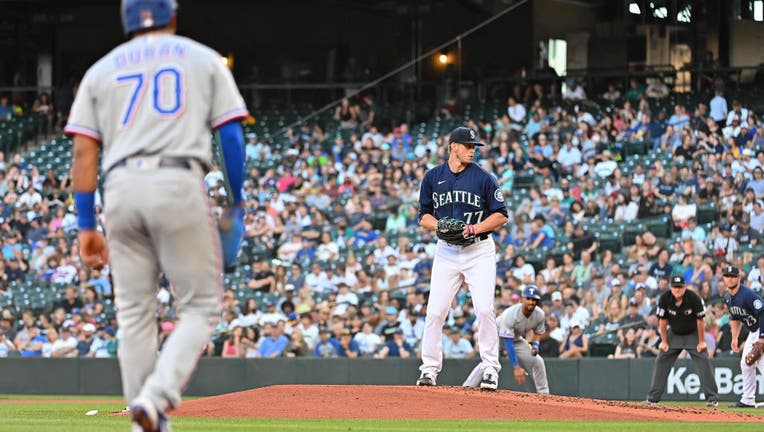 SEATTLE, WASHINGTON - JULY 25: Chris Flexen #77 of the Seattle Mariners stands on the mound with Marcus Semien #2 of the Texas Rangers on first base and Ezequiel Duran #70 on third base during the third inning at T-Mobile Park on July 25, 2022 in Sea

SEATTLE - In the midst of their July surge back into playoff contention, it's become clear the Seattle Mariners have figured out how to succeed in one-run games.

On Monday night, it was a formula of good starting pitching, key baserunning and some more hot hitting from Ty France.

France launched his 13th home run as part of a three-hit night, Cal Raleigh added an RBI single and the Mariners rebounded from a rough weekend with a 4-3 victory over the Texas Rangers.

Erik Swanson escaped a ninth-inning jam and Seattle won for the 15th time in 18 games, a stretch of success interrupted over the weekend when the Mariners were swept at home by AL West-leading Houston following a 14-game winning streak. But Texas was a welcome visitor as the Mariners won their sixth straight over the Rangers and improved to 9-2 against them this season.

Seattle also won its eighth straight game decided by one run and is 22-12 on the season. The last time the Mariners lost a one-run game was June 26 against the Los Angeles Angels.

"We play so many of them that when the time comes we don’t fold into that pressure," France said.

France singled in his first two at-bats, but it was his solo shot to center field in the fifth inning off starter Glenn Otto that gave the Mariners a 3-1 lead. France has homered in three of his past five games, including Seattle’s last one before the All-Star break when he went deep off Otto (4-7) in Texas.

Raleigh’s RBI single in the fourth drove in France, and the Mariners added another run in the inning when Eugenio Suárez scampered home on a wild pitch. Carlos Santana added an RBI groundout in the seventh.

Flexen (7-8) pitched six innings, giving up two runs and four hits. He escaped a bases-loaded jam in the third with only one run allowed and yielded Adolis García's 18th homer on the first pitch of the sixth.

"The thing with (Flexen), he’s never going to wow you. He’s just always going to keep you in the game," Servais said. "And I appreciate that. I think every manager appreciates those type of guys."

Mariners reliever Diego Castillo ran into trouble in the ninth. Nathaniel Lowe led off with his 14th homer. Leody Taveras followed with a single and Kole Calhoun walked. Castillo struck out Ezequiel Duran before Swanson retired Josh Smith and Marcus Semien for his second save.

"We've got to continue to have conversations and figure out OK, there’s a lot of little plays in there that we have to make," Rangers manager Chris Woodward said. "They made some plays, we didn’t. They made some pitches, we didn’t. We had opportunities at the end. If we’re going to win games, we've got to find a way to get it done there."

Otto allowed three runs and seven hits over 5 1/3 innings, but has not earned a victory since beating the Mariners on June 4.

Rangers: RHP Dane Dunning is expected to be activated from the injured list to start Tuesday. Dunning has been out since July 11 due to an impingement in his right ankle.

Mariners: Servais was hopeful All-Star CF Julio Rodríguez (wrist) would be back in the lineup Tuesday. Rodríguez was expected to increase his baseball activity and take swings before Monday’s game to see how the wrist responds. ... LF Jesse Winker was out of the lineup after spraining his right ankle in Sunday’s loss to Houston. The injury isn’t considered serious and Winker is expected back Tuesday. ... OF Mitch Haniger (ankle) will have his rehab assignment transferred to Triple-A Tacoma starting Tuesday. Haniger played last weekend for Class A Everett. He has been out since late April and said he still needs significantly more at-bats before he’d be ready to rejoin the major league club. "I think I just need quantity right now. Just playing," Haniger said. "I can’t tell you when that will be."

Rangers: Dunning (1-6, 4.42 ERA) will make his first start since July 10. He lasted just 2 1/3 innings and allowed four runs against Minnesota before landing on the injured list. He is winless in his past 13 starts.

Mariners: RHP George Kirby (2-3, 3.78) will make his first start since July 8. The rookie was optioned to the minors before the All-Star break in an attempt to control his innings.