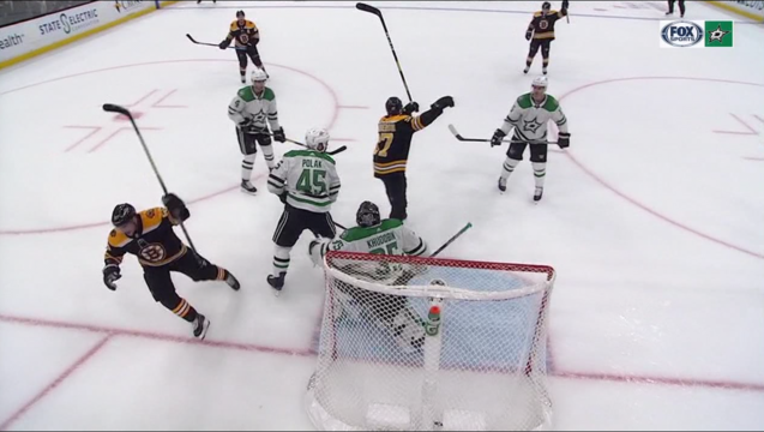 BOSTON (AP) - Brad Marchand had very little room and not much time.

He got the right bounce.

Marchand banked home a power-play goal off the far post from the bottom of the right circle 4:29 into overtime, lifting the Boston Bruins over the Dallas Stars 2-1 on Monday night.

David Pastrnak also scored on the man advantage for Boston, which had lost two of three. Tuukka Rask made 24 saves.

"I think I just wanted to be solid and feel good about the game," said Rask, who has struggled this season. "At the end of the day, we played a pretty decent game - from my part, too."

Radek Faksa had a short-handed goal for the Stars, who are 3-1-1 on a six-game trip. Former Bruins goaltender Anton Khudobin stopped 33 shots.

"It was a little weird because I never ever played against the Bruins in TD Garden," said Khudobin, who played for Boston in parts of the years 2012-13 and 2016-18.

The teams were tied at 1 just more than five minutes in.

In overtime, the Bruins had a two-man power play after Jason Dickinson and Esa Lindell were whistled for minors 11 seconds apart.

"It wasn't our best game, but we gave our team a chance to win on the road," Faksa said.

With the World Series trophy won by the Boston Red Sox in the building before the game, "Dirty Water" was played briefly over the sound system after Marchand's walk-off winner - a song played after victories at Fenway Park. It was his franchise-best 13th career OT goal.

Earlier in OT, Patrice Bergeron hit a post with just more than two minutes to play before Rask made a glove save on Jamie Benn at the end of a 2-on-1 break on the ensuing rush.

"I actually thought Bergy's went in," Marchand said. "I kind of stopped playing for a second."

Despite being outshot 9-8 in the second period, the Bruins hit a post, a crossbar, missed on an excellent chance on a 2-on-1 break and had a goal disallowed late in the period.

Boston had another good chance early in the third when Bergeron's wrist shot from the slot deflected off Khudobin and slid just wide of the right post.

Trailing 1-0, Boston tied it when Bergeron set up Pastrnak's one-timer from the slot 5:11 into the opening period.

The Stars had jumped ahead 1-0 when Faksa flipped a shot over Rask 3:51 into the game.

NOTES: The Bruins honored local military members, veterans and their families as part of Military Appreciation Night. Nine players each purchased $2,500 worth of tickets. ... Red Sox owner John Henry, President Sam Kennedy and pitcher Joe Kelly were on the ice before the game when the trio brought out the World Series trophy. Kelly was part of the ceremonial puck drop. ... The Bruins held Dallas to four shots on goal in the first, tying the fewest they've allowed in any period this season. ... Dallas D Roman Polak played his 700th NHL game.

Stars: At the Columbus Blue Jackets on Tuesday.

Bruins: Host the Vancouver Canucks on Thursday in the second of a four-game homestand.