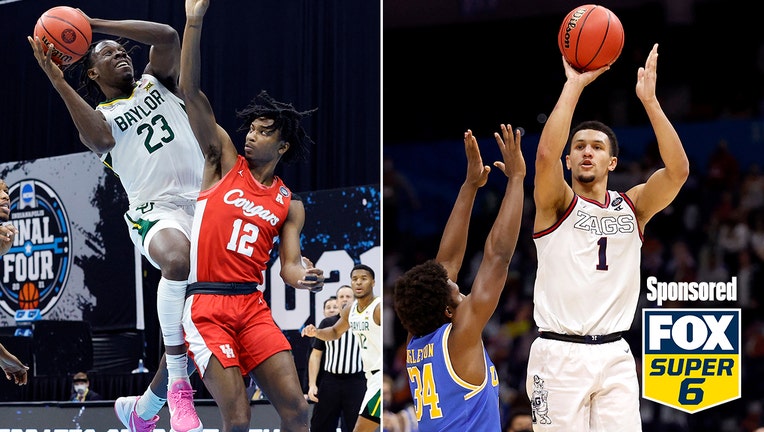 How do you follow one of the greatest games in NCAA Tournament history? By crowning a legendary champion, of course.

No matter what happens when Baylor and Gonzaga play the final game of a bizarre, trying and incredible college basketball season on Monday at Lucas Oil Stadium, it will mark a defining moment in the sport.

The Zags — fresh off an epic, 93-90 overtime win over UCLA thanks to Jalen Suggs’ half-court bank shot of a prayer answered — will try to become the first undefeated national champions in the men’s game since Bobby Knight’s much-celebrated 1976 Indiana team went 32-0 en route to the crown.

Baylor is looking for the first national championship in school history and has been seen as the only team that could prevent the Gonzaga coronation. However, the Bruins on Saturday showed that Gonzaga can be beaten – something Baylor certainly has the ability to do.

FOX Super 6 gives you a chance to win $1,000 on the final game of the 2020-21 college basketball season. You can have one shining moment of your own by answering all six questions on the FOX Super 6 app correctly and winning the grand prize. Best of all, it's absolutely free!

What should you be looking for? Well, here’s the way we see it.

1) A fast start is important

After 48 hours of living in the glow of the Suggs' moment, it is fair to wonder if Gonzaga will have that jump right out of the gate. It isn't uncommon to see teams that win epic games come out worn down in the next game. However, it is rare that the next game is the championship with an undefeated season on the line. The first 10 minutes Monday will be critical.

Meanwhile, Baylor’s demolition of Houston was in large part due to a huge, 45-point first half in which the Bears stifled the Cougars' offense, turning it into easy baskets at the other end. A lot of what the Bears did was create opportunities off their defense. Against Gonzaga, it will be difficult to do that.

After Saturday night, Suggs will forever have a place in the opening tease for the tournament, right next to Kris Jenkins and Christian Laettner. Lost in that performance, however, was the idea that Drew Timme was enormous late in the game, scoring 25 points after he was able to get some room in the UCLA defensive attack. If Gonzaga and Baylor are playing guard-on-guard, Timme could become the main factor in this game.

On the Bears' side, Jared Butler led the team with 17 points and five rebounds from the guard spot. However, one wild card in all of this could be Davion Mitchell, who played the role of distributor so well against Houston, with 11 assists. Mitchell can score, too: He had 23 against Kansas State in the Big 12 tournament. He might have to assume that role again.

3) Not throwin' away my shot

The worst shooting game Gonzaga had in the tournament came against another Big 12 team in Oklahoma in the second round. That night, the Zags "struggled" in hitting 49.1% of their shots. Every other game in the tournament has seen Gonzaga hit at least 50% from the field, including 58.6% from the floor against UCLA.

4) Three in the heart of Texas

If there’s a key number to watch for Baylor, it is shooting from 3-point land. Against Houston, the Bears shot 45% from beyond the 3-point line after shooting 53% against Arkansas in the regional final. In the biggest scare Baylor has experienced in the tournament, against Villanova in the Sweet 16, the Bears hit only 15.8% of their 3-point shots. If Baylor is going to beat Gonzaga, that number has to be near 50% from beyond the arc.

Since 2000, there have been three championship games decided by one possession: Carmelo Anthony and Syracuse’s 81-78 win over Kansas in 2003, Duke’s 61-59 win over Butler in 2010 on the missed Gordon Hayward shot from midcourt and Villanova’s 77-74 victory over North Carolina in 2016 on Kris Jenkins' buzzer-beater. Two other games – Kansas' 2008 victory over Memphis and Virginia’s 2019 win over Texas Tech — were decided in overtime.

All of this is to point out that title games generally fall into a certain range, thanks to late foul shots and forced 3-pointers at the end. If it is a squeaker, Baylor could have an advantage for two reasons: fresher legs after the blowout of Houston and more experience in tight games during the season. Remember that Gonzaga has played two games that finished in single-digit margins of victory: in December against West Virginia and Saturday against UCLA. Baylor has won six such games.

These two teams were supposed to meet early in the season, but a COVID-19 outbreak on the Zags canceled that matchup. Ever since this has been the one game every college basketball fan is still wanting to see.

In reality, the pressure is on Mark Few and Gonzaga. After all, they’ve done the past 20 years to become an elite program, they will not get respect unless they've cut down nets. The reason we’ve seen teams wilt under the strain of perfection since the Knight team in the Final Four — the 1979 Indiana State squad, UNLV’s 1991 team, Kentucky in 2015 — is because it is so difficult to keep that level every single night. Add that Baylor might be playing better than Gonzaga at just about every phase in this tournament, and it is certainly a tempting pick to take the Bears.

If the Zags do finish this thing, if they are able to refocus after winning one of the great games in the history of the sport against an opponent that is their equal in talent, then every bit of praise should be given to them for it.

Play the FOX Super 6 Tourney Challenge all tournament long for your chance to win thousands of dollars every round! Just download the FOX Super 6 app for free and make your picks now.