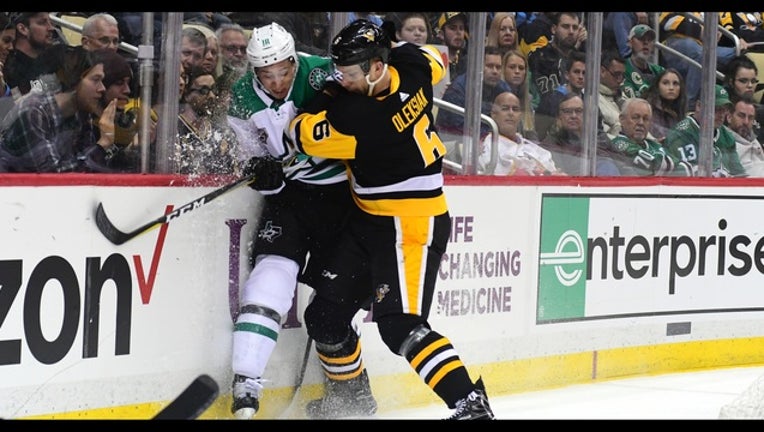 Jamie Oleksiak #6 of the Pittsburgh Penguins checks Tyler Pittlick #18 of the Dallas Stars into the boards at PPG PAINTS Arena on March 11, 2018 in Pittsburgh, Pennsylvania. (Photo by Matt Kincaid/Getty Images)

PITTSBURGH (AP) - Evgeni Malkin is in the midst of a scoring race, while the Pittsburgh Penguins compete for the top spot in the Metropolitan Division. Teammate Jamie Oleksiak helped the cause with a goal against his former team.

Malkin and Oleksiak both scored to help the Penguins beat the Dallas Stars 3-1 on Sunday night.

"I don't really think I need to be a guy that scores a bunch of goals or gets a bunch of points," said Oleksiak, who scored his fifth of the season. "We have a lot of that here."

Malkin is a prime example with his 39th goal of the season and an assist. He has 87 points to pull one behind league-leader Nikita Kucherov of Tampa Bay. Malkin's 39 goals are also one from the league's co-leaders - Washington's Alex Ovechkin and Winnipeg's Patrik Laine.

"I just don't want to think about that," Malkin said. "I want to sleep at night. It's a good challenge for me."

Malkin, now with 919 points, moved past Pavel Datsyuk for fifth on the NHL's all-time points list among Russian-born players. Malkin, with 38 points in his last 20 games, also equaled a season-high six-game points streak.

"It has been confidence, I think," Malkin said. "I feel it again, and if you score in one or two games, you feel so much better."

Patric Hornqvist scored a power-play goal, his 20th, to help the Penguins win for the fourth in five games.

Pittsburgh, which rebounded from a 5-2 loss at Toronto one night earlier, jumped past Washington for first place in a tight Metropolitan Division. The Penguins, who lost six of their previous seven against Dallas, have won 14 of their last 15 overall at home.

Casey DeSmith made 17 saves for the Penguins with starter Matt Murray out for his seventh game with a concussion.

"You can tell by the way we played tonight that we are trying to get into that playoff mode," DeSmith said.

Alexander Radulov scored a power-play goal, his 25th of the season, for the Stars, who started a critical late-season stretch of six road games in 10 days with a loss against the two-time defending Stanley Cup champions. Dallas, the first wild card in the Western Conference, is 14-15-3 on the road and has just two wins in its last six games.

"It's always a little disappointing to not get points at this time of year," Lehtonen said. "It doesn't matter if it's the first game of the road trip or what not. We played careless."

Hornqvist opened the scoring with a first-period power-play goal. The final pick of the 2005 NHL Draft, he has scored at least 20 goals in eight of 10 NHL seasons, including the last five. The Penguins had two goals in their last 18 power-play chances prior to Hornqvist's goal.

Oleksiak gave Pittsburgh a 2-0 lead with 3.7 seconds left in the first. The Stars drafted Oleksiak in the first round of the 2011 NHL Draft and Pittsburgh acquired the 6-foot-7, 25-year-old defenseman from Dallas on Dec. 19 for a 2019 conditional fourth-round draft pick.

"I just kind of closed my eyes and shot it as hard as I could," Oleksiak said. "I was calling for it a little bit, he put it in my sweet spot, I saw the opportunity and took it."

Radulov scored a second-period power-play goal on a five-on-three for the Stars' only goal.

Hornqvist thought he had his second power-play goal of the game, and a 3-1 lead for Pittsburgh later in the period. But the Stars challenged the play and the goal was overturned because Malkin went offside earlier in the sequence.

"It was a surprise to me, but it's the rules," Malkin said. "Sometimes that happens."

Penguins: Open a three-game road trip at the New York Rangers on Wednesday