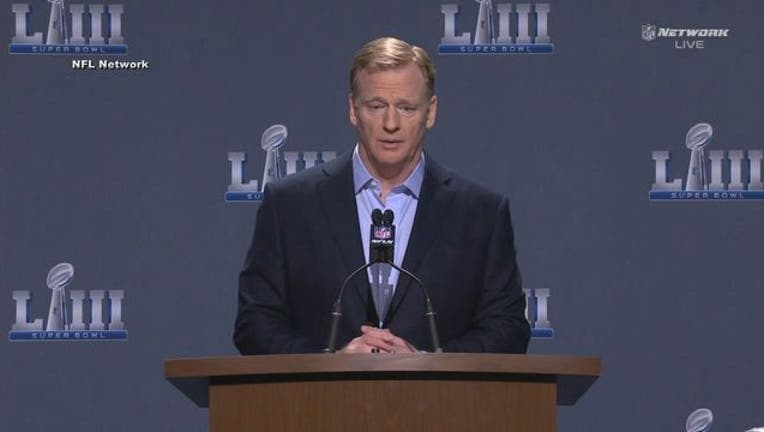 ATLANTA (AP) - Faced with a blitz of officiating questions and queries about the effectiveness of the Rooney Rule, Colin Kaepernick's football unemployment, and the cancellation of a news conference for a Super Bowl halftime show that has drawn hefty criticism, Roger Goodell scrambled.

The NFL commissioner did provide some nuggets of news on Wednesday. He noted establishing a quarterbacks summit at Morehouse College in June to help get more minority coaches into the pipeline of higher-level assistant coaching jobs that are quicker pathways to head coaching opportunities. Otherwise, Goodell generally ducked the rush at his annual State of the NFL appearance as effectively as Russell Wilson.

Naturally, Goodell was peppered with questions, some bordering on demands, to upgrade the officiating 10 days after a non-call late in the NFC championship game pretty much cost the Saints a spot in the Super Bowl.

He didn't rule out adding such plays to the video review system, and he definitely didn't endorse such a move.

"We will look again at instant replay," said Goodell, who added that league executives recognize the frustration of Saints fans. "There have been a variety of proposals over the last - frankly 15 to 20 years - of should replay be expanded? It does not cover judgment calls. This was a judgment call.

"The other complication is that it was a no-call. And our coaches and clubs have been very resistant and there has not been support to date about having a replay official or somebody in New York throw a flag when there is no flag (thrown). They have not voted for that in the past. It doesn't mean that we won't. It's something that we're going to put to the competition committee to see if there's an answer to that, but the reality is that's been at least an opposition philosophically for many clubs."

Goodell completely ruled out any use of commissioner's powers to change the call or resume the game; a lawsuit was filed in New Orleans seeking that. He also stressed that he and the competition committee will examine a potential expansion of replay to include helmet-to-helmet hits.

"We have worked very hard to bring technology in to try to make sure we can do whatever possible to address those issues," Goodell said. "But technology is not going to solve all of these issues. The game is not officiated by robots, it's not going to be. But we have to continue to go down that path."

The path to top coaching positions has been a rocky one for minorities. In a report Wednesday, the AP pointed out that on 2018 coaching staffs, only four minorities held the stepping-stone jobs of offensive coordinator and quarterbacks coach, just 7.1 percent of 56 jobs. That lack of minority coaches in the pipeline helped contribute to the NFL's sharpest-ever one-year drop in minority head coaches, from eight to three, with Brian Flores soon to become the fourth when he moves from the Patriots to the Dolphins.

Many advocates of diversity in the league have questioned the current effectiveness of the Rooney Rule, in which teams are required to interview at least one minority candidate for any head coach or general manager vacancy.

Goodell defended the rule, which has been used in other industries, emphasizing it has opened opportunities that didn't exist previously.

"We don't look at the success or failure of the Rooney Rule in one-year increments," Goodell said. "We've had the Rooney Rule around for nearly 20 years. It has had an extraordinary impact on the NFL. Over 20 clubs have hired minority (head) coaches in that period of time.

"We want to figure out how we can create a deeper pool of coaches so that they have that opportunity when the coaching opportunities arise."

- On Kaepernick, who some claim has been blackballed by the league for sparking social injustice and police brutality demonstrations during the national anthem, Goodell said:

"I think if a team decides that Colin Kaepernick or any other player can help their team win, that's what they'll do. They want to win and they make those decisions individually in the best interest of their club. Our clubs are the ones that make decisions on players they want to have on their roster. They make that decision individually in the best interests of their team."

- On the cancellation of the halftime news conference following widespread condemnation of the choice of Maroon 5 and several artists refusing to participate as a sign of support for Kaepernick:

"We're extremely pleased with the diversity, quality and the excitement surrounding our entertainers. This is the biggest stage in the world, and I know people want to be part of that.

"Just to be clear, as I mentioned we have close to 200 million fans. "We know there are segments that are going to have different reactions to different things that go on in our league. Ultimately I think people respect and admire the things we do and want to be part of it."

- On where owner Mark Davis will have the Raiders play in 2019 after the city of Oakland filed a lawsuit against the team that is headed to Las Vegas in 2020:

"I think the hope of Mark is to continue to be in the Bay Area with the Raiders' fans."