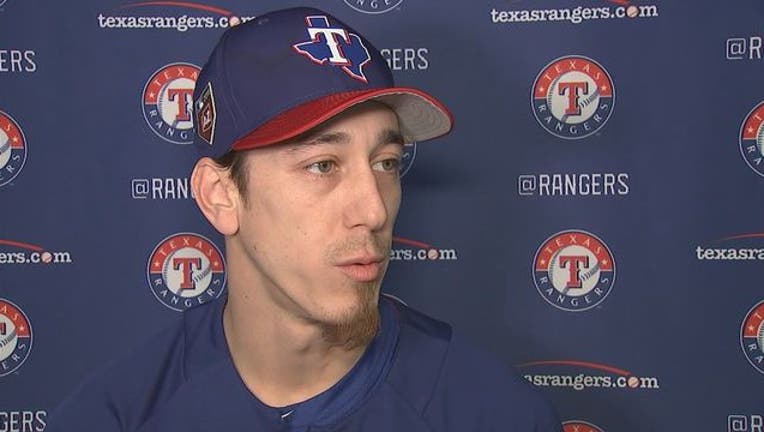 SURPRISE, Ariz. (AP) -- After wearing No. 55 for his entire major league career, Tim Lincecum will switch to 44 with the Texas Rangers in honor of his late older brother.

Sean Lincecum's funeral was Saturday, which delayed Tim Lincecum from taking the physical needed to finalize his $1 million, one-year contract with the Texas Rangers, a deal that allows him to earn up to $4 million if he is healthy all season and becomes the team's regular closer. The two-time Cy Young Award winner passed the physical Tuesday and said he will wear the number his brother used as an amateur.

"I always looked up to my brother," Lincecum said. "He was an idol for me. He just had a lot of bad runs with the choices he made in life."

Texas general manager Jon Daniels said the 33-year-old right-hander will be a reliever and could be the Rangers' closer as he attempts to pitch in the big leagues for the first time since 2016.

"I think it's a great opportunity," Lincecum said. "It was a difficult decision with the Dodgers and the Rangers, but it came down to those two teams. I thought the Rangers would be a better fit. The conversations that we had just made me feel a little bit more warm and fuzzy inside."

Lincecum is fascinated about becoming a closer.

"I feel like I could do that," the two-time Cy Young Award winner said. "I've done that in the Cape (Cod League) and at the college level. It is going to be, obviously, different, but I feel like I could tap into that mentality."

Lincecum has made only eight regular season relief appearances and seven in the postseason. He could make an additional $1.5 million in performance bonuses as a starter and $2.5 million as a reliever, plus $500,000 in roster bonuses.

"Right now, I'm just trying to see where I fit on this team," he said. "The idea was to go to a bullpen role because I felt like that's what would be best for the way I am right now and at this point in my career."

Texas anticipates the four-time All-Star will throw bullpen sessions and batting practice before getting into a spring training game.

"I'm not 100 percent what to expect," Daniels said. "I'm not putting any expectations out there. You are talking about two realities. One, you are talking about one of the best pitchers of this generation. From that standpoint -- it's like what I used to say about Josh Hamilton -- nothing would surprise me. On the flip side, he has had some physical ailments, he didn't pitch last year and he hasn't pitched in quite a while."

A three-time World Series champion with San Francisco, Lincecum was 108-83 for the Giants from 2007-15, nicknamed The Freak for his long hair and 5-11, 170-pound frame. He had season-ending hip surgery in September 2015 and made a brief comeback with the Los Angeles Angels the following season, going 2-6 with a 9.16 ERA in nine starts

Lincecum impressed during a tryout for scouts during the offseason.

"I feel like it would be tough to give up the game while I still have the ability to play it," he said.