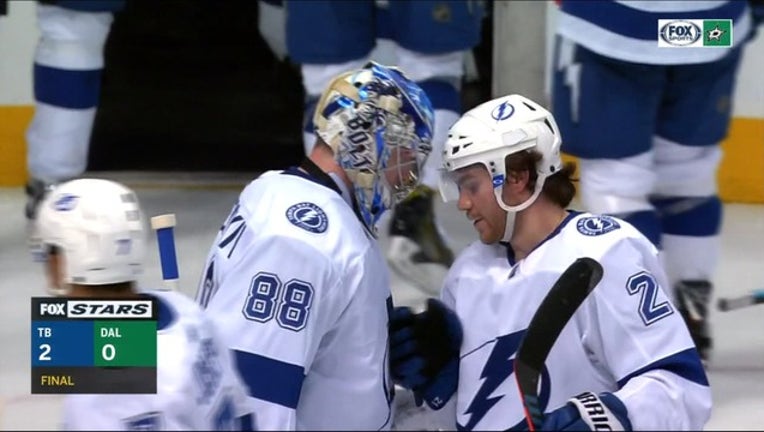 Vasilevskiy improved to 10-2-1 since his return from injury, posting his third shutout this season and 15th of his career for the Lightning, who have an NHL-best 74 points.

Palat gave Tampa Bay a first-period lead with his seventh goal, sending a shot over the glove of Anton Khudobin on a pass from Steven Stamkos, who got his 29th assist. Khudobin had 19 saves.

Sergachev scored a 4-on-4 goal midway through the third period after Dallas captain Jamie Benn canceled out a Tampa Bay penalty for the second time. Benn was called for tripping just 13 seconds after the same penalty against the Lightning's Mathieu Joseph.

The Stars were 0 for 6 on the power play, with four of those chances coming in the second period when they trailed 1-0. It was the third straight loss for Dallas.

The Lightning protected a 1-0 lead despite playing down a man most of the last half of the second period, when the Stars outshot Tampa Bay 13-2.

The first penalty of the game was a double-minor on Victor Hedman for holding and unsportsmanlike conduct about midway through the second.

The Stars had a chance for a 5-on-3 when Anthony Cerelli got a tripping penalty, but Benn was called for goalie interference during the delayed penalty, with Dallas skating 6 on 4.

The best chance for the Stars on the power play came with 13 seconds left when Alexander Radulov fed Radek Faksa just above the crease for a one-timer that Vasilevskiy corralled.

Dallas didn't do much with Tampa Bay's fourth penalty of the second period, an interference call on Nikita Kucherov when he cut in front of Faksa as the Stars forward chased a loose puck into his offensive zone.

NOTES: Former Dallas Cowboys receiver Dez Bryant attended, wearing a Stars jersey with his familiar No. 88 for the franchise's career leader in touchdown catches. Bryant called out the starting lineup in the locker room before the game. ... Andrew Cogliano made his Dallas debut a day after a trade that sent Devin Shore to Anaheim. Cogliano, who took Shore's No. 17, had no shots in 12 minutes. ... Kucherov, the NHL points leader with 75 (22 goals, 53 assists), was held scoreless in consecutive games for the third time this season.

Stars: Play the third game of a six-game homestand, their longest of the season, Thursday against the LA Kings.