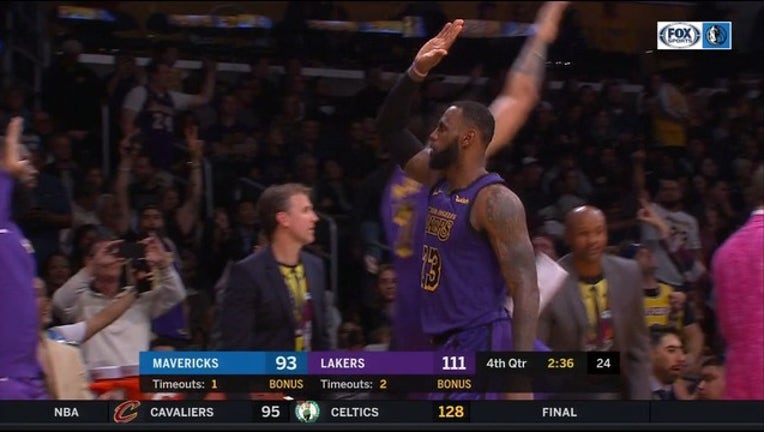 LOS ANGELES (AP) - LeBron James scored 28 points, Brandon Ingram added 19 and the Los Angeles Lakers won their second game in as many nights, 114-103 over the Dallas Mavericks on Friday night.

It's the third time in five back-to-back sets this season that the Lakers have taken both games.

Los Angeles trailed for most of the first three quarters - and fell behind by as many as 15 in the second - before going on a 10-4 run the final three minutes of the third to take a 78-75 advantage into the fourth.

The Lakers were up 90-86 before taking control with a 15-3 run that included nine points by Kentavious Caldwell-Pope.

Harrison Barnes led Dallas with 29 points, and Dwight Powell added 17 off the bench.

Dallas was assessed four technical fouls in the game, including three in the fourth quarter. JJ Barea was ejected midway in the fourth after receiving his second technical.

Dallas led 45-30 less than four minutes into the second quarter when the Lakers got back into it with 10 straight points, which included six by James. The Mavericks led 58-53 at halftime.

Kyle Kuzma added 15 points and 12 rebounds for the Lakers.

Mavericks: Dennis Smith Jr. scored 13 points and Wesley Matthews added 11. DeAndre Jordan had 12 rebounds and eight points. ... Dallas started 3 of 6 on 3-pointers and then went 3 of 21 from beyond the arc the rest of the half. ... The 27 3-point attempts in the first half was a season high, surpassing the 26 the Mavs had on Oct. 20 against Minnesota. ... Barnes is averaging 17 points against the Lakers in the first half of games this season.

Lakers: Tyson Chandler (13 points, 12 rebounds) also had a double-double while Lonzo Ball added 10 points. ... Los Angeles had 11 turnovers in the first half, marking the 11th time this season it had 10 or more in the first 24 minutes. ... Kuzma scored 13 points in the third quarter, which is his second most in a quarter this season. He had 14 in the second quarter against San Antonio on Oct. 22.

Mavericks: Remain in Los Angeles to face the Clippers on Sunday.