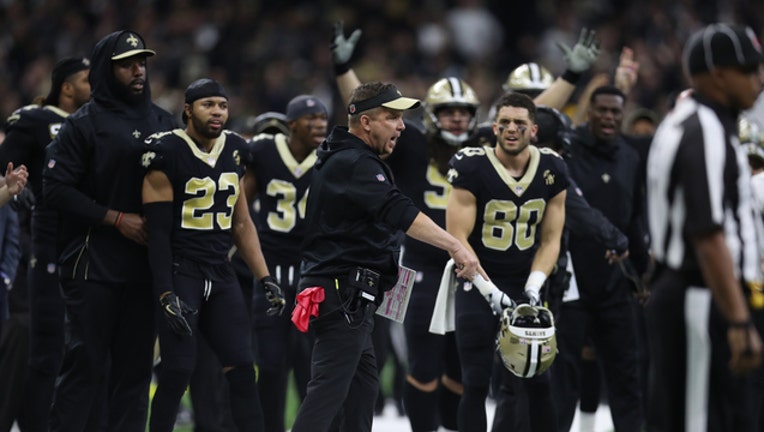 Head coach Sean Payton of the New Orleans Saints reacts against the Los Angeles Rams during the fourth quarter in the NFC Championship game. (Photo by Chris Graythen/Getty Images)

NEW ORLEANS (AP) -- In the legal equivalent of a Hail Mary pass, two New Orleans Saints season ticket holders asked a judge on Tuesday to order the NFL commissioner to reverse the results of the NFC championship game that sent the Los Angeles Rams to the Super Bowl, or schedule a do-over.

Their lawsuit, filed in state court, says Commissioner Roger Goodell should implement a league rule governing "extraordinarily unfair acts." Remedies include reversal of a game's result or the rescheduling of a game - in its entirety or from the point when the act occurred.

At issue is the failure of officials to call interference or roughness penalties when a Rams player leveled a Saints receiver with a helmet-to-helmet hit at a crucial point in Sunday's game. The NFL hasn't yet responded. A hearing is tentatively set for Monday - six days before the Rams meet the New England Patriots in the Super Bowl in Atlanta.

"Why is the rule there if it's not going to be implemented?" asked attorney Frank D'Amico, who filed the suit in state Civil District Court in New Orleans on behalf of Tommy Badeaux and Candis Lambert.

No penalty was called after the Rams' Nickell Robey-Coleman hit Saints receiver Tommylee Lewis while a pass was in the air with less than two minutes to go in regulation on Sunday. A flag would have meant a first down for the Saints, who could have run down the clock and won the game with a field goal. Instead, the Saints kicked a go-ahead field goal with 1:41 left. The Rams came back to tie with a field goal before winning in overtime.

There appears to be no dispute that a penalty should have been called. Robey-Coleman later said he expected a flag. Saints coach Sean Payton said the NFL office acknowledged the error to him after the game.

The question is whether an officiating mistake - even an egregious one - is the type of "club action, non-participant interference, or calamity" that merits the remedy D'Amico's clients seek.

Mike Pereira is among the doubters.

"I understand the frustration," the former vice president of officiating for the NFL, now a Fox Sports analyst, said in an interview. But, he doesn't believe the rule applies in this case.