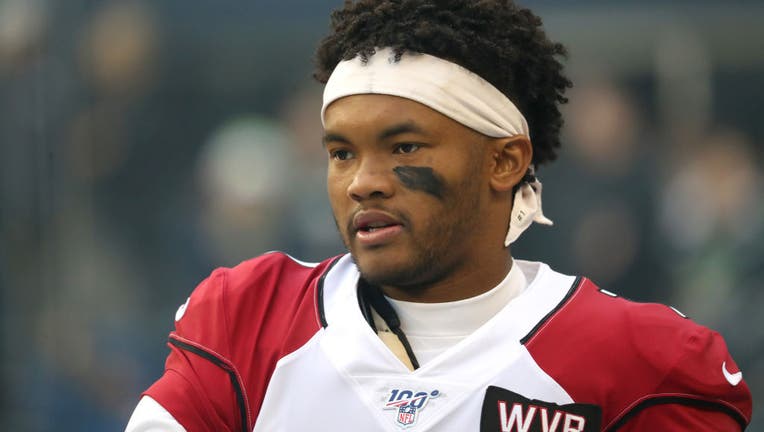 SEATTLE, WASHINGTON - DECEMBER 22: Kyler Murray #1 of the Arizona Cardinals looks on prior to taking on the Seattle Seahawks during their game at CenturyLink Field on December 22, 2019 in Seattle, Washington. (Photo by Abbie Parr/Getty Images)

MIAMI (AP) - Top overall draft pick Kyler Murray has joined such other No. 1 overall selections as Earl Campbell and Cam Newton as The Associated Press NFL Offensive Rookie of the Year.

The fast, elusive and creative quarterback is the sixth man to start off the NFL draft and then win the best offensive rookie honor since the 1970 merger. Newton is the most recent, in 2011, one year after Sam Bradford did it. The others were running backs Campbell (1978), Billy Sims (1980) and George Rogers (1981).

That earned him 26 1-2 votes in balloting by 50 members of a nationwide media panel that covers the NFL. Murray easily outdistanced Oakland running back Josh Jacobs, who had 13. Tennessee wide receiver A.J. Brown had 9 1-2 votes, and the other selection went to Philadelphia running back Miles Sanders.

Murray is the second Arizona Cardinal and fourth player in franchise history to win the award. Receiver Anquan Boldin took it in 2003, while running backs Ottis Anderson in 1979 and Johnny Roland in 1966 won it.

Results were announced at NFL Honors.