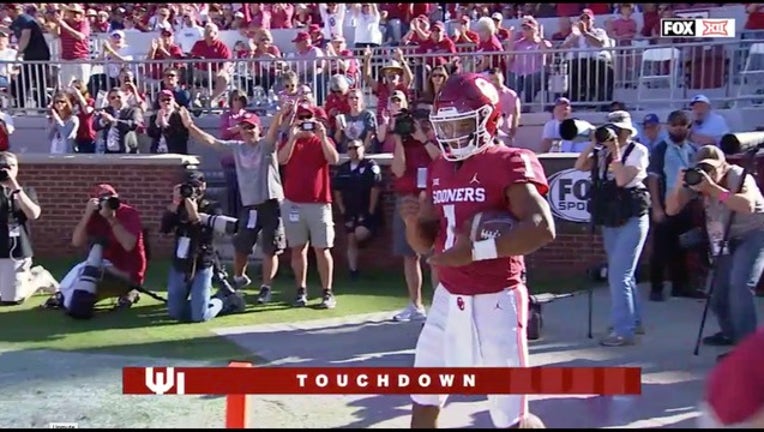 NORMAN, Okla. (AP) - Kyler Murray passed for 352 yards and three touchdowns and ran for another score to help No. 8 Oklahoma beat Kansas State 51-14 on Saturday.

The Sooners (7-1, 4-1 Big 12) rolled up a season-high 702 total yards and only punted once, and that was in the fourth quarter after Murray was done for the day.

CeeDee Lamb caught four passes for a career-high 160 yards and two touchdowns, and Kennedy Brooks ran for 94 yards and two scores. The Sooners won their second straight since losing to Texas.

"He's been tremendous against everybody, so that's, of all the stats in the game, that's one of the ones that I know I'm most proud of," Oklahoma coach Lincoln Riley said.

The Sooners gained 209 yards in the first quarter and took a 17-0 lead. Murray threw two touchdown passes in the period, including an 82-yard connection with Lamb.

Murray ran for a 9-yard touchdown in the second quarter to push the lead to 31-7, and the Sooners were ahead 34-7 at the break. Murray completed 17 of 22 passes for 289 yards and two touchdowns and ran for 37 yards and another score in the first half.

Kansas State: The Wildcats ran for 319 yards against Baylor and 291 yards against Oklahoma State in their previous two games. They found the going tough against the Sooners, a bit of a surprise against a Sooner team that had struggled at times against the run this season. Kansas State gained just 137 yards rushing on 32 carries.

Oklahoma: The Sooners put together their second consecutive solid defensive performance under interim defensive coordinator Ruffin McNeill. The Sooners held TCU to three points in the second half of a 52-27 win last Saturday, then held Kansas State to seven points through three quarters.

"Our mentality is good," Riley said. "We're practicing really well. I think the coaches have done a good job putting it together. We've made some changes. We're playing with some guys we weren't playing with before and they're playing well together as a group."

The Sooners might not move up much in the next poll, but they helped perception with a second consecutive dominant performance.