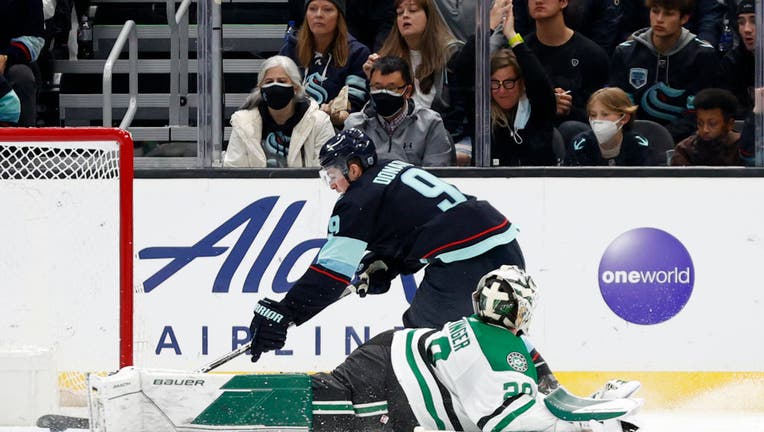 SEATTLE, WASHINGTON - APRIL 03: Ryan Donato #9 of the Seattle Kraken scores against Jake Oettinger #29 of the Dallas Stars during the third period at Climate Pledge Arena on April 03, 2022 in Seattle, Washington. (Photo by Steph Chambers/Getty Images

SEATTLE - The final month of their first NHL season will see the Seattle Kraken get plenty of chances against teams fighting for positioning or playoff spots.

The Kraken are hoping to see more performances like what they got on Sunday night.

Jared McCann scored a short-handed goal in the first period, Ryan Donato converted on a breakaway early in the third period, and the Kraken beat the Dallas Stars 4-1.

Seattle denied the Stars a chance to leap into the top wild-card spot in the Western Conference.

"I’ve been impressed by the work ethic of our team, how together that we’ve been able to play with a lot of the changes and some of the individuals that have stepped forward and are proving themselves and doing good things night after night," Seattle coach Dave Hakstol said. "So we want to continue that. It’s a busy month. We got a long month in front of us. But let’s try to have some fun."

McCann’s early goal was his 25th of the season and Donato added a beautiful finish five minutes into the third period to give the Kraken a cushion. It was Donato’s 14th of the season, tying his career-high.

Yanni Gourde added a breakaway goal with 2:13 left and Karson Kuhlman scored an empty-netter in the final minute as Seattle snapped a two-game losing streak. Chris Driedger was terrific in net and nearly posted his first shutout of the season, finishing with 29 saves — including several sprawling stops early in the third period.

"I think were a more competent hockey team. Things have been going our way a little bit more lately," Driedger said. "We’ve been playing just better hockey and competing, no matter what the score is. I really liked our effort tonight."

John Klingberg scored with 5:35 remaining on a shot through traffic to pull the Stars within 2-1. It was Klingberg’s fifth goal of the season. Jake Oettinger had 25 saves while losing for the second time in his last five games as Dallas missed a chance to jump past Vegas and Nashville.

While Seattle is nowhere near the playoffs, the expansion squad will have an influence on how the playoff picture plays out over the final few weeks of the regular season. Seattle has nine games remaining against teams currently top three in their division or fighting for a wild-card spot.

Vegas picked up four crucial points by sweeping two games from the Kraken earlier this week. The Stars could not capitalize in the same way.

Dallas had won five straight on the road and was looking to sweep a four-game road trip after winning a pair in Anaheim and beating San Jose on Saturday night. But the Stars looked like a team playing a challenging back-to-back and struggled to create good scoring chances against the fresher Kraken.

"This one stings a little bit because you come in 3-0 you fully expect to go out 4-0," Dallas’ Joe Pavelski said. "Six out of eight points, throughout a season you’re thinking that’s a pretty good trip. But in this situation you’d like to be a little greedy or a little selfish and wanted that fourth one."

McCann gave Seattle the early advantage while on the penalty kill with the eighth short-handed goal of the season for the Kraken. McCann and Alex Wennberg caught Dallas in a change late in the Stars’ power play and scored on the odd-man rush.

Donato’s breakaway goal came off a perfect stretch pass from Carson Soucy, who also assisted on McCann’s goal. The goal came moments after an excellent two-save sequence by Driedger, sliding across to deny Miro Heiskanen on the second attempt.

NOTES: Stars D Esa Lindell missed his fourth straight game with an upper body injury. ... Dallas beat Seattle 5-2 in the first matchup earlier this season. Pavelski had five points in that victory. ... Seattle’s only shutout came on Feb. 2 when Philipp Grubauer stopped 19 shots in a 3-0 win over the New York Islanders. Driedger’s last shutout was May 10, 2021, while playing for Florida when he stopped 30 shots in a win over Tampa Bay.