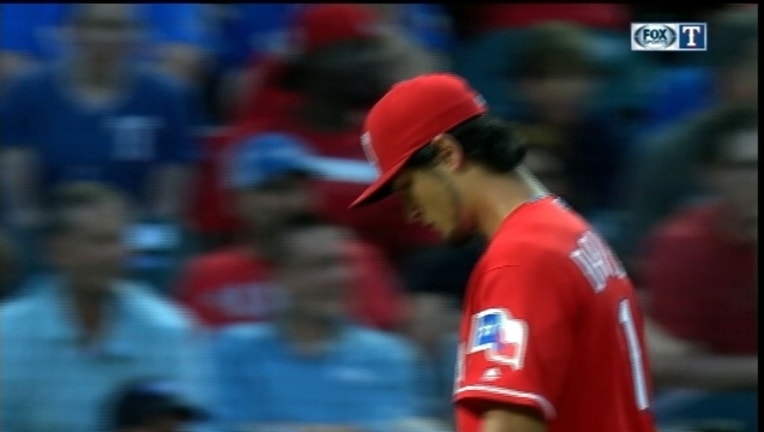 Keuchel earned his major league-leading ninth win in a place where he has struggled in the past, and the Astros won their eighth game in a row with a 7-1 victory over the Texas Rangers in a matchup of aces Friday night.

Carlos Correa and George Springer each hit a three-run homer for the Astros (39-16), who have the top record and longest winning streak in the majors.

The Astros were ahead to stay after Correa's homer in the fifth off Rangers ace Yu Darvish (5-4), winless in his last eight starts against Houston.

"We put some pressure on Darvish from the beginning," Houston manager A.J. Hinch said. "We had opportunities that we created for ourselves. Correa got the lesser end of those two battles, and then the third time's a charm. ... A really big, game-changing hit."

After striking out twice, Correa hit his 10th homer on a drive that cleared the 14-foot wall in left-center field to make it 3-0. That followed two-out hits by Josh Reddick and Jose Altuve.

After the start was delayed by rain for 2 hours, 6 minutes, Keuchel (9-0) struck out seven and walked two while limiting the Rangers to three hits. The 2015 AL Cy Young Award winner worked out of a bases-loaded jam in the sixth when he got Rougned Odor on an inning-ending groundout.

Adrian Beltre ended Houston's shutout bid when he led off the ninth with a homer against Ken Giles, the third Astros reliever.

Texas is 3-9 since its 10-game winning streak that is still the longest in the majors this season. The Rangers, who won the AL West each of the past two seasons, dropped 13 games behind the Astros in the division.

In the first head-to-head matchup between the two aces since 2014, Darvish stuck out eight while throwing 104 pitches over five innings

Darvish is 0-4 with a 4.47 ERA in his last eight starts against the Astros since late in the 2013 season, the same year he came within one out of a perfect game versus Houston.

Springer's 13th homer capped a four-run outburst off reliever Dillon Gee in the eighth, when all the Houston runs were unearned.

The Astros have won their last eight road games, matching the second-longest streak in franchise history. Overall, they are 23 games over .500 for the first time since the end of the 2001 season.

With a double and a homer, Beltre now has 1,076 extra-base hits, passing Reggie Jackson for 24th on the career list. Beltre has 2,948 hits overall, five in four games since coming off the disabled list this week after missing the first 51 games this season because of calf issues.

Houston had a runner reach second base in every inning that Darvish pitched, but failed to score in the first four. Brian McCann was hit by a pitch in the second before his second stolen base in five seasons. In the fourth, he snapped an 0-for-15 slump with a one-out double.

Rangers: Texas reliever Jose Leclerc was reinstated from the DL after missing three weeks with a bruised finger. He took the roster spot that opened when former closer Sam Dyson was designated for assignment.

Astros: Right-hander Lance McCullers Jr. (6-1) makes his first start since being selected AL pitcher of the month for May, when he went 4-0 with a 0.99 ERA.

Rangers: Andrew Cashner has won two of his last three starts after 10 consecutive starts without a victory. The Rangers will try to avoid their fourth consecutive series loss.