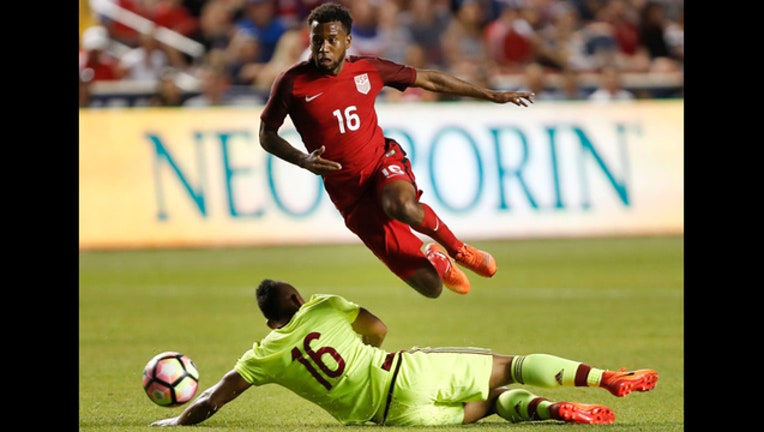 TAMPA, Fla. (AP) - Kellyn Acosta is young, talented and eager to make the most of another opportunity to shine on the international soccer stage.

The U.S. faces Martinique in its second match of the CONCACAF Gold Cup, with Acosta and teammates hoping to make amends Wednesday night for a subpar performance in last weekend's 1-1 tie against Panama.

The 21-year-old midfielder who played all 90 minutes of the opener in Nashville, Tennessee, was especially critical of his own play on Twitter. He's confident the team will play better in the North and Central American and Caribbean championship.

"I was a little upset about how I played individually and, obviously, collectively as a team. I thought we expected more out of ourselves," Acosta said Tuesday before practice at the University of South Florida.

"But sometimes that's how the game goes," he added. "It's a long tournament. We still have two more games to kind of just get back on track and get back to things we're good at. That's the beauty of it. We have two more opportunities to bounce back."

The U.S., which failed to protect a lead in its opening match, concludes group play Saturday against Nicaragua in Cleveland.

The top two teams in each of three groups automatically advance to the quarterfinals, where they'll be joined by the two best third-place finishers.

Martinique, facing the Americans for just the second time, leads Group B after beating Nicaragua 2-0 in Nashville.

"The guys are really positive about going out and getting the result we need," said Acosta, a rising Major League Soccer star with FC Dallas.

"Martinique is sitting at the top of the table, so ... it's imperative that we get the three points," the native of Plano, Texas, added. "We can't settle for anything less."

Acosta, who turns 22 on July 24, scored his first international goal against Ghana in an exhibition July 1. He's gradually played his way into a bigger role with the national team since Bruce Arena returned for a second stint as coach, replacing Jurgen Klinsmann.

"I'm just trying to be consistent, comfortable in my spot. I think, the more games I play the more comfortable I feel," Acosta said. "Obviously, Bruce has given me some extra responsibilities here with the team, and I'm excited to do so."

Arena has promised adjustments, including some lineup changes, though not solely because of the team's performance against Panama, which rallied from a 1-0 deficit after Dom Dwyer gave the U.S. a short-lived lead.

Heat was a factor last Saturday in Nashville and figures to be again Wednesday night at Raymond James Stadium, even though kickoff isn't scheduled until 9 p.m.

"We'll make some changes. The number we don't exactly know. But we have a number of players who can step in and play," Arena said.

"We not only have to plan for two games this week, but we have to win both games," the coach added. "It's an important week for us. Rotating players only makes sense."

"I thought it was a little bit too easy for them," the midfielder said. "Defensively for us we were almost too soft. They were really physical with us and really aggressive and ... we didn't really adjust to it at all."

Arena noted that apart from goalkeeping there was little to be pleased about in the opener.

But like Acosta and Dwyer, who became the 10th player to score in each of his first two international appearances for the national team, Arena expects the squad to improve as the tournament progresses.

"It takes a little bit of time, but there's no excuse for the way we played on Saturday," Arena said. "We have to play better."

"A lot of work still needs to be done. I definitely need to touch up on some things, but I'm growing, I'm still learning each and every day," he said.

"In a way we're still trying to adjust to each other," Acosta added. "It's definitely difficult playing with a new group of guys, but obviously individually we have to be better. For myself, I know I have to be a lot better if I want to continue to get minutes."