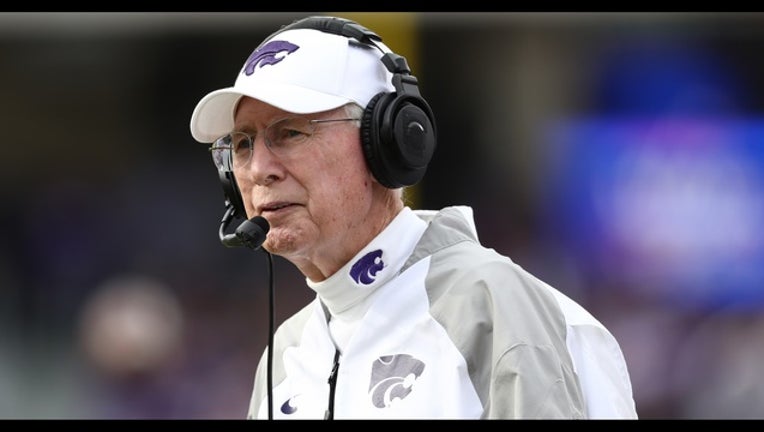 MANHATTAN, Kan. (AP) - Bill Snyder already was considered the architect of the greatest turnaround in college football history before he decided to return from a three-year retirement to resurrect Kansas State again.

Now, the 79-year-old coach is heading back into retirement.

Snyder decided to step away Sunday after 27 seasons on the sideline, ending a Hall of Fame tenure in Manhattan that began in the Big Eight and weathered seismic shifts in college football. Along the way he overcame throat cancer, sent dozens of players to the NFL and gave countless more an opportunity to succeed not only on the field but also in life.

"Coach Snyder has had an immeasurable impact on our football program, Kansas State University, the Manhattan community and the entire state of Kansas," Wildcats athletic director Gene Taylor said. "He and his family have touched the lives of so many people, from student-athletes, coaches, staff and fans, and he is truly one of the greatest coaches and leaders in college football history.

"His impact on college football is unmatched and legacy is one that will last a lifetime."

The Wildcats fell apart during a season-ending loss to Iowa State, leaving them 5-7 and at home for the bowl season. Snyder finishes with a resume featuring a record of 215-117-1, trips to 19 bowl games, two Big 12 championships and a legacy that will endure long into the future.

The highway leading into town already has been renamed in his honor, leading fans from Interstate 70 to the stadium that bears the name of his family. A large bronze statue of Snyder stands outside.

Taylor said the search for a new coach will begin immediately with help from Ventura Partners, and a clause in Snyder's contract indicates he will have input in the decision. Taylor also said Snyder will exercise a clause that allows him to become a special ambassador to the university at a yearly salary of $250,000 for "as long as he is physically and mentally able."

"This university, this community and this state are deeply indebted to Coach Bill Snyder," Kansas State president Gen. Richard Myers said. "He came here, and stayed here, because of the people. He made us a family - a proud purple family who travel in record numbers to watch him lead the Wildcats to victories, bowls and rankings never achieved before."

Snyder arrived at Kansas State in the fall of 1988, a nondescript offensive coordinator from Iowa who once coached high school swimming before learning under legendary Hawkeyes coach Hayden Fry.

The Wildcats had just four winning seasons the previous 44 years, and they were in the midst of a 27-game winless streak. Dozens of confidants implored Snyder not to take over what "Sports Illustrated" famously called "Futility U," certain that it was a coaching dead end.

Snyder was still mulling his decision when he walked the campus one cold morning. He was smitten by the friendliness of the people, their earnestness and work ethic, and he accepted the job.

"I think the opportunity for the greatest turnaround in college football exists here today," he would say at his introductory news conference, "and it's not one to be taken lightly."

That news conference occurred 30 years ago Friday, beginning a turnaround of not only the long-languishing football program but a university in need of a boost.

Snyder introduced a new logo to distance the Wildcats from their losing past, and he began to heavily recruit junior colleges. He steadily improved the roster, beat North Texas that first year to end the long winless streak and slowly won over skeptical fans.

He did it with hard work, pure and simple. He was famous for eating once a day, lest he waste any time dining. He once consulted a sleep expert to divine a way to get by on four hours' a night. He demanded the same rigorous schedule of his assistants, a group that would include future head coaches Bob Stoops, Bret Bielema, Dan McCarney and Jim Leavitt.

The wins began to pile up: The Wildcats went 5-6 in Year 2, won seven games the next season and went 9-2-1 to earn their first bowl berth in 1993. It began a streak of 11 consecutive postseason trips, highlighted by three Holiday Bowl appearances, two Cotton Bowls and a pair of trips to the Fiesta Bowl.

Kansas State started to slip in 2004 and '05, though, a pair of winless seasons that appeared to take their toll on Snyder. And he surprised many by announcing his retirement, telling a packed room inside the old football complex that he wanted to spend more time with his family.

He said he wanted a break. It didn't last very long.

After watching the program slide under Ron Prince, the silver fox was lured out of retirement to rebuild the program once more. Two seasons later, the Wildcats were back in a bowl game; a season after that, they rose to No. 1 in the nation before playing in the Cotton Bowl, and a year after that, they won Snyder his second Big 12 championship and landed in the Fiesta Bowl.

Five more bowl games followed, even though the Wildcats never reached the same heights. It was a period marked by sustained success, if not the excellence of Snyder's earlier years.

The biggest scare of his career came two years ago, when Snyder was diagnosed with throat cancer. He went through grueling rounds of chemotherapy and radiation while rarely missing a spring practice, and he was back last season to lead the Wildcats to the Cactus Bowl.

But with a depleted roster and a young, rebuilt coaching staff, this past season never got on track. The Wildcats barely beat South Dakota, were routed by Mississippi State and struggled to live up to expectations as they barreled toward their worst season in more than a decade.

Along the way, the cracks began to show: There was the rare outburst at a reporter during a news conference and the even rarer sight of Snyder calling out individual players for poor play.

By the time Kansas State struggled to beat Kansas, it appeared Snyder had made up his mind.

The famously secretive Snyder kept the decision to himself, though, and the Wildcats handily beat Texas Tech to keep their bowl hopes alive. But when they blew a big fourth-quarter lead against Iowa State to end their season, Snyder looked both exhausted and defeated.

He looked as if he was ready for another break.