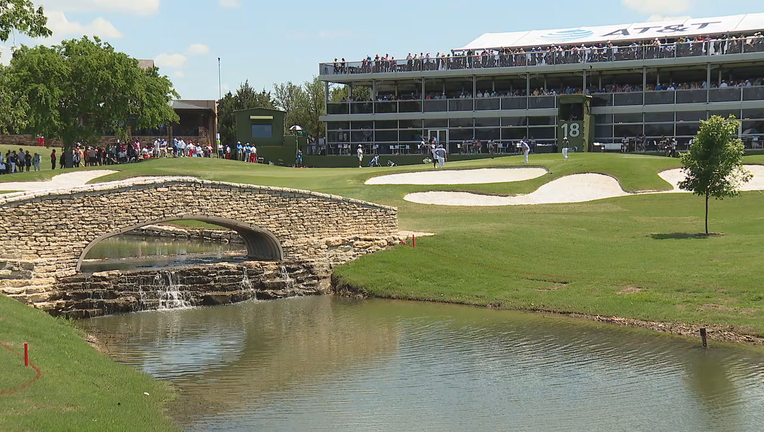 McKINNEY, Texas (AP) - K.H. Lee was more than happy to play through a steady downpour in the final round of the AT&T Byron Nelson, and didn't mind waiting out a weather delay of more than two hours Sunday.

The reward was the final spot next week in the PGA Championship.

Lee earned his first PGA Tour victory and the chance to compete on the Ocean Course at Kiawah Island in South Carolina, becoming the second consecutive Nelson winner from South Korea by finishing at 25 under, three ahead of third-round leader Sam Burns.

Heavy rain fell most of the back nine for the leaders, with puddles showing up on greens over the final holes and one ball in the fairway stuck in the middle of a fast-moving stream. The players slogged through the deluge before lightning forced a delay.

Most of the standing water was gone when play resumed two hours and 23 minutes later. Lee missed a par putt on No. 16 to cut his lead to two, but answered with two birdies. The sun came out just as Lee was finishing his 6-under 66.

Burns struggled to a 71 to finish at 22 under, a shot ahead of 2011 Masters champion Charl Schwartzel, Daniel Berger, Patton Kizzire and Scott Stallings. Troy Merritt and Joseph Bramlett finished two more back at 19 under.

When the delay hit, Jordan Spieth already knew he was going to fall short again in his hometown event, played on its third course in the past four Nelsons at the rain-soaked TPC Craig Ranch in McKinney, about 30 miles north of Dallas.

Spieth, three back to start the day, shot 71 and tied for ninth, giving him his first top 10 at the Nelson 11 years after he was a contender on Sunday as a 16-year-old when the course was at its home of more than 30 years at the TPC Four Seasons.

South Korea's Sung Kang was the defending champion after winning in 2019, when the second of just two Nelsons was played at the treeless links course Trinity Forest in Dallas. The move was unpopular with fans and players, and Craig Ranch became the home following last year's COVID-19 cancellation.

One thing about this Nelson was the same, though: notorious spring weather in Texas.

Threesomes started from the first and 10th tees just after daybreak to try to beat a forecast calling for increasing rain throughout the day.

Steady rain for two-plus hours got progressively worse as players began ducking for cover under umbrellas immediately after shots and constantly wiped grips with towels. From the start of the round, they got to lift, clean and place their shots in the fairways.

Lee overtook Burns, who shot 70, before it got really wet.

The 29-year-old from Seoul went ahead for good with a birdie on the par-4 third hole and stretched the lead to four at No. 8 by putting his second shot within 4 feet for birdie. Burns threw his ball in disgust after missing a 5-foot birdie try.

Lee, who finished tied for second at the Phoenix Open in February, had the lowest score to par at the Nelson on the par-72 Craig Ranch layout, beating 23 under from both years at par-71 Trinity Forest. The Four Seasons was par 70.

Lee is getting his third shot at a major after twice missing the cut at the U.S. Open. The first was in 2014, more than three years before his second PGA Tour appearance.

Burns wrapped up his PGA spot two weeks ago with his first tour victory at the Valspar Championship when he finally converted a 54-hole lead into a win after two failed attempts this season.

The 54-hole lead again got away from the 24-year-old from Louisiana, who was trying to become the first player since Camilo Villegas in 2008 to get his first two PGA Tour victories in consecutive starts.

Seamus Power was 21 under through eight holes but fell back with a rare double bogey at the par-4 13th on a course that yielded nearly 100 scores in the 60s in the opening round. Power shot 70 and was in the group at 18 under with Spieth, Jhonattan Vegas (67) and Doc Redman (70).

Kizzire, the only player with two rounds of 64 or better, was 8 under for the day through 12 before settling for his 63. He vaulted in contention with a second-round 64 before a 71 Saturday.