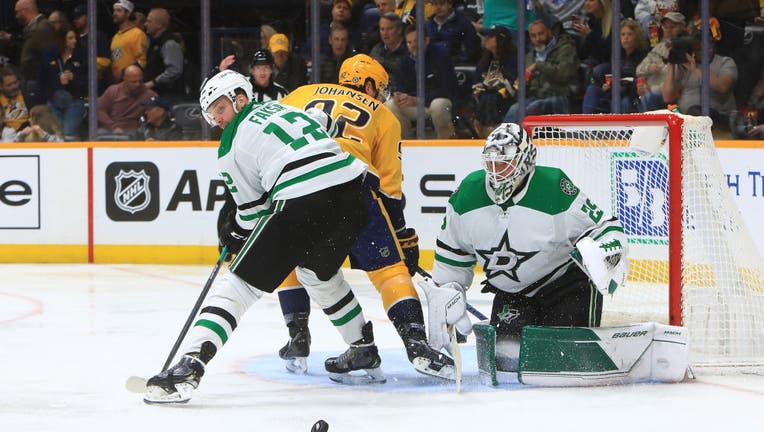 NASHVILLE, Tenn. (AP) - Roman Josi scored with 1:22 remaining to give the Nashville Predators a 2-1 victory over the Dallas Stars on Tuesday night.

"One of the things we talk about in the room is toughness wins — mental toughness, physical toughness," Nashville coach John Hynes said. "And I think tonight is another example of that."

John Klingberg scored and Jake Oettinger made 29 saves for Dallas, which had its four-game winning streak snapped.

"We keep losing one-goal games to these guys, it’s disappointing," Stars coach Rick Bowness said. "We battle them and we’ve just got to find a way to get that second goal."

With time winding down in the third, Josi fired a one-timer from the left point by Oettinger for the game-winner.

The teams entered Tuesday in the Western Conference’s two wild-card positions. Nashville moved one point ahead of the Stars with the victory, with each team having played 56 games.

"Huge win for us, obviously playing team that is one point ahead of us in our division," Josi said. "It was a tough game, kind of the way you expect it against Dallas. Low-scoring game. Good defense, good goaltending, not a lot of room out there. But it’s great. We found a way. They got the goal early, but we never gave up and found a way to win."

"It’s a tough way to lose, obviously," Klingberg said. "It was a grinding game, it always is when we play these guys. They were able to find a way there to come out with two points, so it’s disappointing."

Just after the opening faceoff of the third period, his wrist shot from above the right circle deflected off Nashville forward Eeli Tolvanen and past Saros, who had traffic in front of him.

Alexandre Carrier carried the puck on the left side and found Johansen in the slot. There, he drove to the left before beating Oettinger with a backhand.

"Yeah, (Carrier) made an unbelievable play, drew two guys to him and laid it in behind," Johansen said. "I was just sneaking in there and happy to get it. I was just trying to make a play. Great to be able to tie it up, and for Josi to get it in regulation, too, for us to not give them a point is huge."

With his goal, Klingberg ended a couple of slumps. His goal was his second of the season but first since Dec. 18, a stretch of 25 games without a goal. Tuesday was Klingberg’s 36th career regular season game played against Nashville, and the first goal he scored against the Predators. He has 24 assists in his career against Nashville.

Dallas has not allowed a Nashville power-play goal in four games played this season. After denying the Predators on both of their opportunities with the man advantage Tuesday, the Stars concluded the season series with Nashville a perfect 12 for 12 on the penalty kill.

Tolvanen skated in his 100th career NHL game Tuesday. Nashville selected Tolvanen in the first round, 30th overall, in the 2017 Entry Draft. Tolvanen has seven goals and 10 assists in 53 games played this season. Six (one goal, five assists) of his 17 points this season have come on the power play.

Oettinger made his 13th start in Dallas’ last 15 games. He is 9-3-1 in those games, backstopping the Stars in their charge up the standings of late.