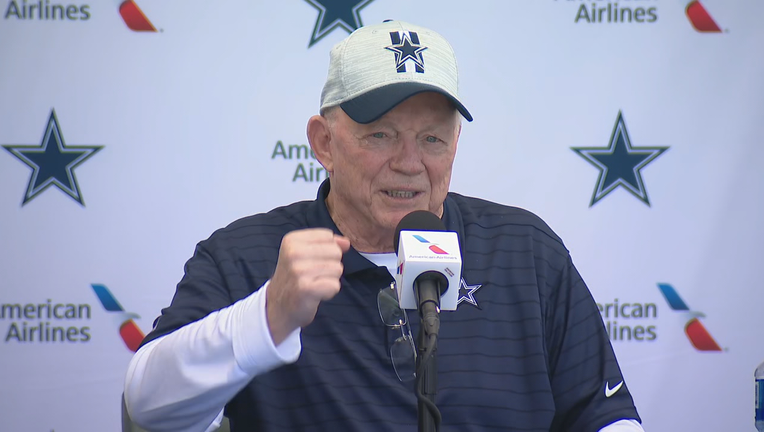 OXNARD, Calif. - Dallas Cowboys owner Jerry Jones said only a "handful" of players on the roster aren’t on track to be fully vaccinated.

Questions about COVID-19 vaccine acceptance and protocols against the virus dominated the annual State of the Team press conference that kicks-off training camp each season.

Jones said five players won’t commit to getting COVID-19 vaccines. There are 89 players at training camp, which returned to Oxnard, Calif. after a one-year break. Last year’s camp was held in Frisco due to the pandemic restricting travel for NFL teams.

The Cowboys are currently not at the 85 percent threshold that would reportedly loosen or remove COVID-19 restrictions and protocols put into place by the NFL. NFL Network reported that, as of last week, 13 teams in the league had hit the threshold.

Cowboys Executive Vice President Stephen Jones called the effort a "work in progress, but I think we will hit that threshold and more."

Jerry Jones and other members of the front office and staff encouraged players to get the vaccine throughout the summer.

Head coach Mike McCarthy also shared his initial hesitancy on getting the vaccine, but then told reporters he wound up getting it after listening to medical experts and talking to doctors.

"I made a conscious decision to get the vaccination," he said.

Neither of the Jones’ or McCarthy revealed which players have declined to get the vaccine.

The Cowboys’ first preseason game is in two weeks, Aug. 5, in Canton, Ohio. Dallas is playing Pittsburgh in the annual Hall of Fame game.