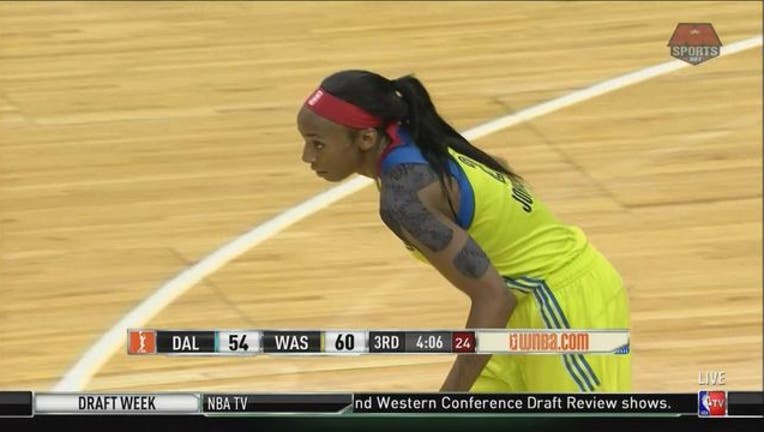 WASHINGTON (AP) - Glory Johnson scored 16 of her season-high 27 points in the third quarter and the Dallas Wings closed on an 8-0 run to beat the Washington Mystics 87-83 on Sunday.

Skylar Diggins-Smith had 19 points, seven rebounds and eight assists, and Theresa Plaisance and Allisha Gray each scored 12 points for Dallas (5-8). The Wings, who trailed by as many as 12 points in the second half, snapped a three-game skid.

After a defensive three-seconds call against Washington (7-4), Diggins-Smith made the technical free throw and Plaisance made two foul shots to trim Dallas' deficit to 83-82 with 1:47 to play.

Elena Delle Donne missed a short jumper on the other end, and two free throws by Karima Christmas-Kelly with 54 seconds remaining gave the Wings their first lead since 17-16. Johnson and Diggins-Smith combined to hit three of four foul shots from there to seal it.

The Mystics missed their final four field-goal attempts and were scoreless for the final 2:08.

Tianna Hawkins hit a 3-pointer to spark a 13-1 run that made it 29-18 with seven minutes left in the second quarter and the Mystics led until closing seconds. Tierra Ruffin-Pratt scored eight points during that stretch.