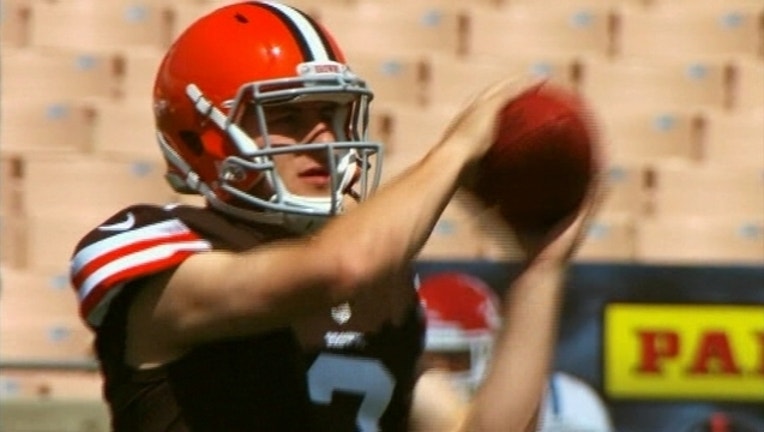 CLEVELAND (AP) — Johnny Manziel promised he would win back the trust of the Browns and teammates with his actions following a rocky rookie season.

After making significant strides in his second year in the NFL, a recent incident could raise concerns about the popular quarterback again.

Manziel was questioned by police after witnesses saw him arguing on the side of a highway with his girlfriend and pulling her back into his car as she tried to exit the vehicle. Manziel admitted to police that he had consumed alcohol before the dispute.

The former Heisman Trophy winner, who spent 10 weeks in a rehab facility during the offseason, was parked in a gravel driveway Monday when Avon, Ohio, police spoke to him following an argument with girlfriend Colleen Crowley.

Manziel wasn't arrested and Crowley told police she didn't want to press charges against him. The couple was allowed to leave the scene together. The Browns were off on Monday following a win over Baltimore the previous day, and Manziel said the couple had been in downtown Cleveland before driving to the city's west side.

Manziel checked himself into a Pennsylvania rehab facility specializing in the treatment for alcohol and substance abuse in January for an unspecified condition. It is not known if his aftercare prohibits him from drinking.

"It is a matter that we take seriously and have expressed our concerns to Johnny directly," Farmer said. "Those conversations will remain private and we will refrain from further comment at this time."

A team spokesman said Manziel's status for the Browns' home game Sunday against Denver has not changed. He could face discipline by the NFL per its personal-conduct policy.

Manziel has been Josh McCown's backup for the past three games. He started for an injured McCown in Week 2 and led the Browns to a win over Tennessee.

Shortly after the Browns issued their statement, Manziel posted an explanation about the incident with Crowley on his Twitter account.

"Colleen and I got into a dumb public argument on the way home Monday afternoon," Manziel wrote. "It probably looked more interesting than it was and I know I would stop and check if I saw a couple arguing on the side of the road. It was embarrassing but not serious and when we talked to the police and they realized everything was alright and I was sober, we went home together and everything is fine."

"J & I are good," she said. "I appreciate the people who stopped to check on us and call the police. I could see how it may have looked. Anytime anyone sees a guy and a girl arguing on the side of a road they should definitely stop, you never know what that could be. Fortunately it was just an argument, it was private, and we are all good!"

According to the police report, officers noticed an abrasion on Crowley's arm, but said it was caused by Manziel restraining her from jumping from the car. Police said Crowley appeared intoxicated and she told them she had consumed at least three drinks.

Crowley told police she threw Manziel's wallet out of the car during their argument because he was "driving bad." She also told police that Manziel had pushed her head "against the glass of the car," but Crowley said she was not fearful of his actions or that he could cause her physical harm.

Browns linebacker Paul Kruger arrived at the scene while Manziel was being questioned.

The Browns have been impressed with Manziel's attitude and a renewed commitment this season. That wasn't the case during 2014 when he struggled on and off the field, leading to speculation about his future as a pro. He came into the league with a reputation for partying, one that was chronicled across social media leading into his first season with Cleveland.

Manziel has not spoken to the media in several weeks.

This is the second high-profile incident involving alcohol that the Browns have had to deal with recently. Former offensive line coach Andy Moeller was investigated following an assault complaint filed against him by his fiancee. The Browns quickly suspended Moeller, who has since parted ways with the team.