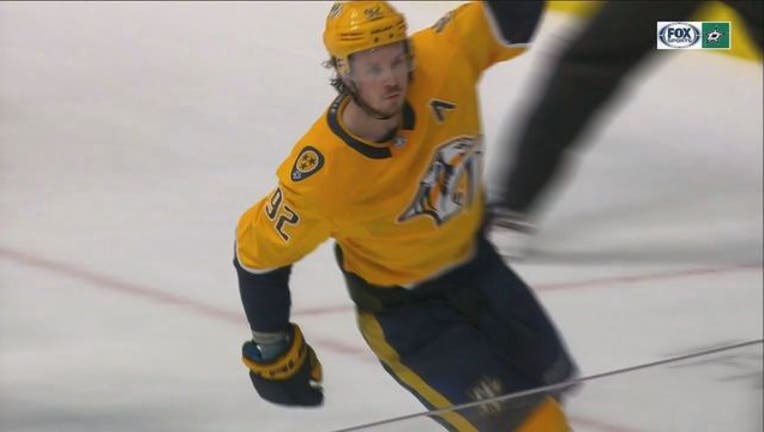 NASHVILLE, Tenn. (AP) - Ryan Johansen scored 43 seconds into overtime and the Nashville Predators beat the Dallas Stars 3-2 on Thursday night for their second straight win and a little cushion in the Central Division.

Juuse Saros made 27 saves to improve to 14-6-1, with wins in six of his last seven starts.

Viktor Arvidsson had a goal and an assist, and Craig Smith also scored for Nashville, which evened up the season series with Dallas at 2-2-0 and pushed the second-place Predators' lead to nine points over the Stars in the division.

Saros made a pad save on Alexander Radulov with 1:38 left in regulation, and Nashville had a chance late with Johansen's shot from the slot wide.

Johansen made up for that with his winner with a wrist shot from the inside edge of the right circle.

Nashville had a lot on the line, wanting revenge after a 3-1 loss to the Stars last weekend on the Predators' home ice. The Predators also debuted forwards Brian Boyle and Cody McLeod after a pair of trades Wednesday , and center Kyle Turris returned after missing the last 17 games because of an injury.

The 6-foot-6 Boyle immediately joined the top power-play unit, planting himself in front of the net, and McLeod just missed on a scoring chance in the second.

Khudobin came in having allowed only one goal in Dallas' last two wins over Nashville, and he robbed Kevin Fiala on a 2-on-1 with a great glove save in the first period. But the Predators finally beat the goalie by literally scoring off him. Fiala's shot deflected off Smith's back over the net and bounced off Khudobin's back and in at 17:48 of the period.

Heiskanen tied it up at 3:05, scoring his 10th this season off a rebound for Dallas.

Stars defenseman Roman Polak swept the puck away from the goal line after Colton Sissons' slap shot went off the butt end of Khudobin's stick, then Nashville took a 2-1 lead at 8:41 of the third on a tic-tac-toe goal with Johansen starting the sequence before Filip Forsberg found Arvidsson for his 22nd goal of the season.

But the Stars answered right back with Fedun beating Saros' at 9:46.

NOTES: Nashville improved to 24-3-1 when scoring first. ... Buffalo Beauts goalie Shannon Szabados was at the game ahead of the NWHL All-Star Game here Sunday. ... Tennessee athletic director Phillip Fulmer and football coach Jeremy Pruitt were at the game.