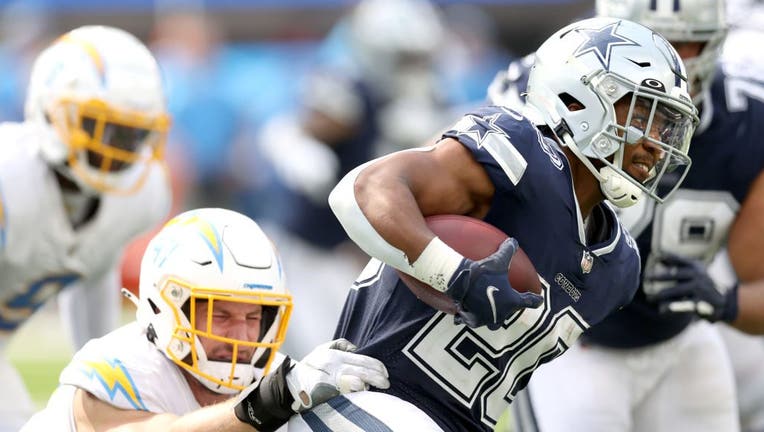 INGLEWOOD, CALIFORNIA - SEPTEMBER 19: running back Tony Pollard #20 of the Dallas Cowboys runs the ball during the second quarter in the game against the Los Angeles Chargers at SoFi Stadium on September 19, 2021 in Inglewood, California. (Photo by R

DALLAS - Dallas Cowboys owner Jerry Jones says there is no debate over the team’s running backs.

In Sunday’s win over the Los Angeles Chargers on the road, the player most fans see as the number two running back, Tony Pollard, had 109 yards compared to star running back Ezekiel Elliott’s 71.

Both scored touchdowns, though.

Jones said there is plenty of room on the field and on the roster for both.

"Well, I see it as a great asset to this team and you don't have an issue. We could have more carries or more touches by the running back and in my opinion will because both of the players are outstanding out of the backfield as receivers and quite a threat. And when you see Moore doing the job, our coordinator doing the job he did to neutralized San Diego's defense, you see what getting the ball out quick, getting the ball to the outside to those backs can do," Jones said on his radio show.

Elliott has a six-year deal worth $90 million while Pollard has a four-year contract for $3 million.

The 1-1 Cowboys play their first home game against their NFC East rival, the Philadelphia Eagles, on Monday night.