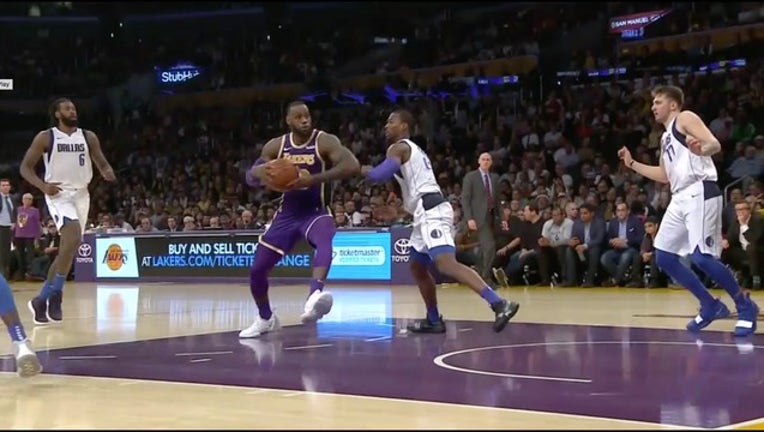 LOS ANGELES (AP) - LeBron James scored 29 points and made the game-winning free throw with 2.1 seconds left as the Los Angeles Lakers held on for a 114-113 win over the Dallas Mavericks on Wednesday night.

The Lakers led nearly throughout and were up 111-98 with 3:42 to go before the Mavericks went on a 15-2 run to pull even with 7 seconds remaining. Luka Doncic tied it at 113 on a jumper from the corner, but James was fouled by Wesley Mathews while shooting a jump shot.

James missed the first free throw but made the second, and the Lakers (3-5) stopped a two-game skid.

JaVale McGee added 16 points and 15 rebounds, and Kyle Kuzma scored 18 for the Lakers.

The Lakers scored the first eight points and led by 18 in the first quarter as they went 15 of 23 from the field and made six 3-pointers.

Dallas trimmed the margin to 66-59 by halftime. Matthews' driving bank shot pulled the Mavericks to 70-64 before the Lakers went on a 17-4 run - which included 10 points by James - to open their largest lead at 87-68 with 4:40 remaining in the third quarter.

Mavericks: Doncic, who scored 31 points Monday night at San Antonio, missed his first six shots from the field but finished with 14 points. He came in leading Dallas at 20.4 points per game. ... DeAndre Jordan had 12 rebounds and 10 points. ... J.J. Barea came off the bench to score 15 points. ... The Mavericks were 14 of 19 from the field in the second quarter. ... G Devin Harris (left hamstring strain) missed his seventh straight game.

Lakers: Los Angeles has won three straight against the Mavericks. ... Kuzma scored 11 points in the first quarter. ... The 38 points were a season high for a first quarter. ... F Michael Beasley missed his second straight game due to personal reasons.

Lakers: At Portland on Saturday.