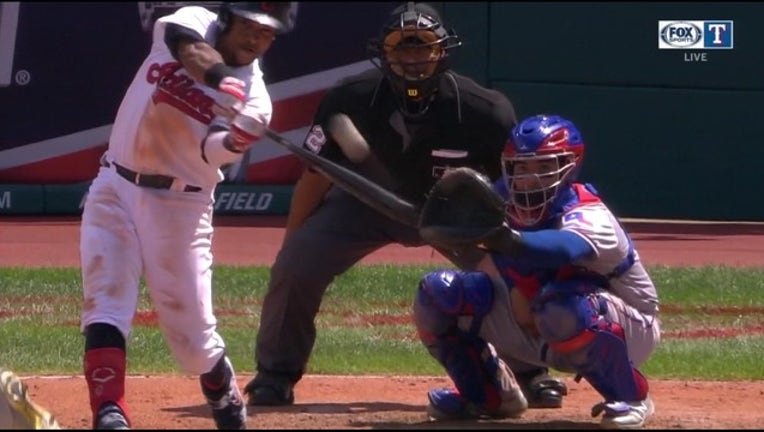 The Indians are in position to erase it completely.

José Ramírez homered in both games, Cleveland's bullpen combined on a four-hitter in the second game and the Indians swept a doubleheader Wednesday from the Texas Rangers to set up a four-game showdown series against the AL-Central leading Twins.

"It's what we wanted," said second baseman Jason Kipnis. "We wanted to play some fun games down the stretch."

Ramírez hit a two-run homer in the opener as the Indians won 2-0, and he connected again in his first at-bat in the second game as Cleveland rolled to a 5-1 victory.

By going a baseball-best 38-16 since June 4, the Indians have slashed Minnesota's 11 ½-game lead to two in a division still very much up for grabs. The teams will open their series on Thursday at Target Field, and Kipnis for one can't wait to get it started.

"Today was a big day," he said. "Everyone wanted to get these two. Everyone was kind of watching the scoreboard over in Minnesota, too, and we knew it had a chance to be a big day for us and it worked out perfectly for us. Guys are in a good mood, feeling good and excited to get to Minnesota."

Ramírez, who has raised his average nearly 50 points since late June, connected in the second inning of the second game off Lance Lynn (14-7). Franmil Reyes hit a sacrifice fly in the seventh and Carlos Santana, Yasiel Puig and Kipnis drove in runs in the eighth as the Indians (68-46) went 22 games over .500 for the first time in 2019.

Indians manager Terry Francona turned to his relievers in the second game and the reliable group came through with Tyler Clippard pitching two perfect innings and A.J. Cole (3-1) - Cleveland's third pitcher - getting the win by working 2 2/3 scoreless.

Nick Wittgren got the final five outs for his third save.

"They were tremendous," Francona said. "Clippard set the tone and guys went multiple innings and they got lefties and righties out. ... There's no wiggle room for anybody to really have a bad inning and nobody did. That was really impressive."

The Rangers managed only two runs in three games at Progressive Field. Texas won the opener 1-0, but then didn't score for 21 straight innings before Willie Calhoun homered leading off the eighth.

Making up for a sluggish start this season, Ramírez homered off Lynn, who entered 3-0 with a 0.95 ERA in three career starts against Cleveland.

But the right-hander made one mistake in the second, grooving a 95 mph fastball on his first pitch to Ramírez, who turned and deposited it into the lower seats in right field.

"I made one bad pitch to Ramirez," Lynn said. "It didn't go where I wanted to. He's kind of been in that zone you've seen him in the last couple of years. When you make a mistake he puts a good swing on it."

In the opener, Ramírez connected off Ariel Jurado (6-7), who had blanked the Indians on two singles before allowing the third baseman's 15th homer.

Nick Goody (3-0) replaced rookie starter Zach Plesac in the seventh and pitched two scoreless innings. All-Star closer Brad Hand struck out the side in the ninth for his 28th save.

Plate umpire Chris Guccione left the second game in the middle of the fourth, shortly after he was struck in the mask with a foul tip. Guccione was replaced by John Libka, who left his spot at third to go behind the plate.

"He was kind of showing concussion-like symptoms," Francona said. "That scares you immediately."

The Indians have 12 shutouts, tied with the Los Angeles Dodgers for the most in the majors.

Rangers: RHP Shawn Kelley (sore biceps) was activated from the 10-day injured list and was brought in during the eighth inning of the second game.

Indians: Francona said the plan is for RHP Corey Kluber to throw "50-ish" pitches in his rehab start Thursday for Triple-A Columbus, a significant step for the two-time Cy Young winner in his recovery from a broken right arm. Francona added that Kluber, who was struck by a line drive on May 1, is cleared to throw his full array of pitches.

Rangers: Rookie LHP Kolby Allard will be recalled from Triple-A Nashville and make his debut for Texas on Friday in Milwaukee. He was acquired from Atlanta at the trade deadline.