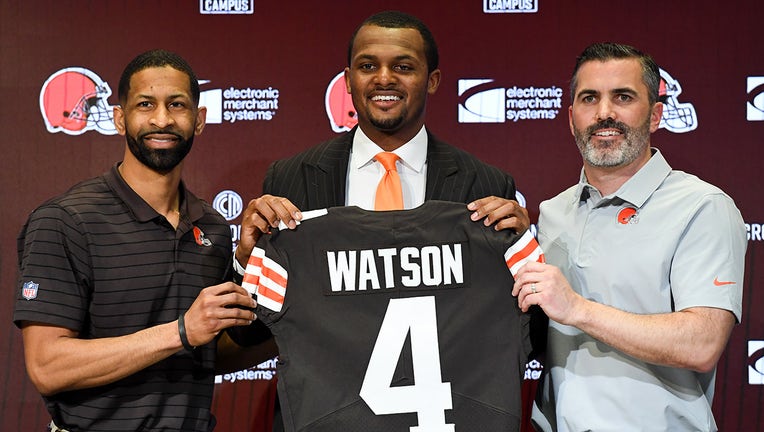 BEREA, Ohio - Deshaun Watson maintained his innocence and strongly denied committing any sexual misconduct despite allegations made by 22 women against the Cleveland Browns' new starting quarterback.

"I've never assaulted or disrespected or harassed a woman in my life," Watson said, flanked at the dais inside the team's headquarters by Browns general manager Andrew Berry and coach Kevin Stefanski. "That's not how I was raised. I've never done these things people are alleging."

It was the first time Watson has answered direct questions about the allegations, which first surfaced in March 2021. Watson didn't play last season for the Houston Texans as the cases mounted.

For nearly 40 minutes, Watson was asked about his character, the charges against him and how he'll attempt to rebuild his image. He understands there are people who will never believe him.

"I know that there’s going to be a stain that probably is going to stick with me for awhile, but all I can do is keep moving forward and to continue to show the person that I am, the true character, the true person, the true human being I am," the 26-year-old said.

"I never done the things that these people are alleging and I’m going to continue to fight for my name and clear my name and like I’ve been doing, just cooperate with everything that comes with it." 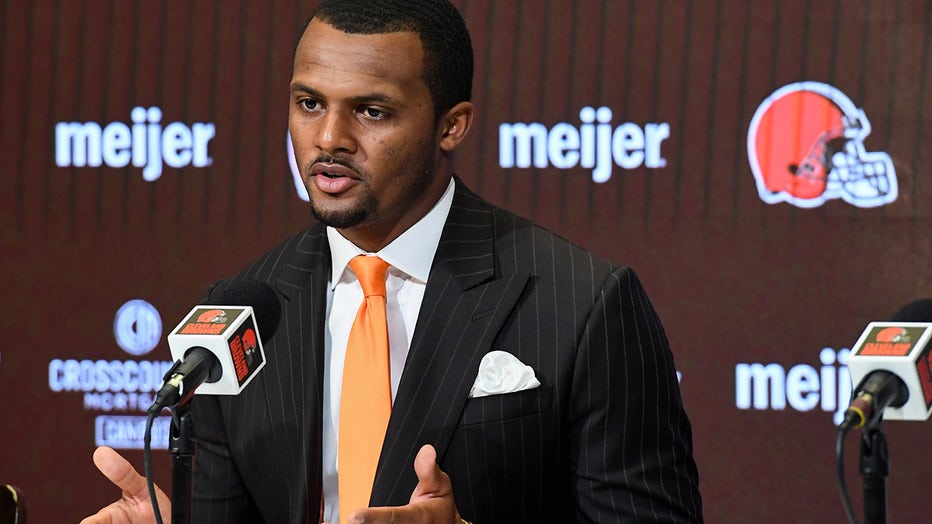 Quarterback Deshaun Watson speaks during his press conference introducing him to the Cleveland Browns on March 25, 2022 in Berea, Ohio. (Photo by Nick Cammett/Getty Images)

Berry defended the team's controversial decision to trade for Watson, who has been accused by two dozen massage therapists of various unwanted sexual activity during private sessions. He has always claimed any sex was consensual.

"We as an organization know that this transaction has been very difficult for many people, particularly women in our community," Berry said. "We realize that it has triggered a range of emotions. And that, as well as the nature of the allegations, weighed heavily on all of us.

"It was because of the weight of the anticipated reaction and the nature of the allegations that really pushed us to do as much work as possible internally and externally in terms of understanding the cases and who Deshaun was as a person.

"We do have faith and confidence in Deshaun as a person."

Owners Dee and Jimmy Haslam expected there would be strong backlash from people opposed to the trade, and that it might trigger strong emotional reaction by anyone who has suffered sexual abuse.

"We put more time, more thought, more effort, talked to more people, did more research on this decision — by far — than any other decision we've made with the Cleveland Browns," Jimmy Haslam said on a Zoom call from outside the country. "It's not something we took lightly."

Dee Haslam said she had conversations with the couple's daughters during the vetting process, and that ultimately she became agreeable with acquiring Watson after learning more about his character.

"This has been a really hard and difficult journey for us and our family," she said. "We had to work really hard to get comfortable with the decision. It took some time."

While Watson hasn't been indicted by two grand juries in Texas on criminal charges, he's still facing civil lawsuits. He has no intention of settling the lawsuits and that his only goal "is to clear my name."

Berry described the Browns' independent investigation as "a five-month odyssey" that resulted in the team feeling comfortable enough with Watson as a person to trade for him — and in extension make him the face of their franchise.

Given the serious accusations and ongoing legal matters, the Browns have been criticized for their pursuit and signing of Watson. Berry said the team was advised by its attorneys not to reach out to any of the 22 women because it could interfere with the criminal investigation.

Berry paused for several seconds before addressing the concerns of some fans, who have said they will no longer support the Browns because of Watson.

"We totally respect and we totally empathize with those sentiments right now and totally understand that there are people who are not comfortable with the transaction right now," he said. "But again, we followed our information, we feel good about Deshaun as a person and we think that he is going to do a lot of positive in the community."

The Browns lured Watson to Cleveland with a record-setting $230 million, fully guaranteed contract, which includes a $1 million base salary in the first season in the event he's suspended by the NFL.

The league has an ongoing investigation into his behavior and whether he violated the personal conduct policy.

Watson said the Browns' contract had nothing to do with him waiving his no-trade clause to come to Cleveland.

On Thursday, a second grand jury in Texas decided not to indict Watson on one of the original criminal complaints of sexual misconduct. Watson being cleared by another grand jury had triggered his pursuit by the Browns and several other teams hoping to sign the three-time Pro Bowler.