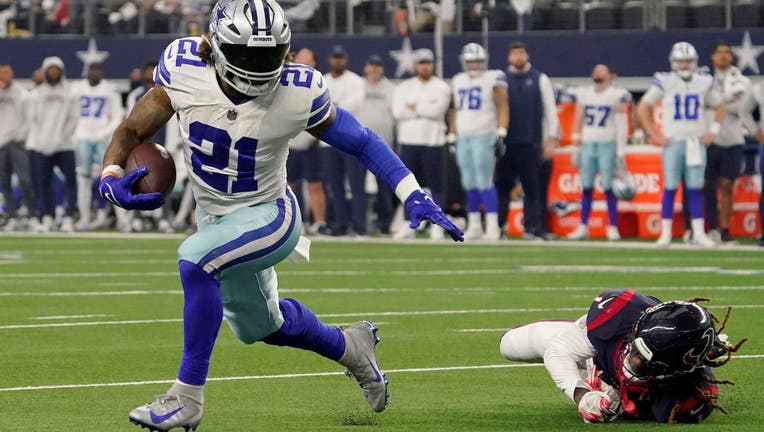 ARLINGTON, TEXAS - DECEMBER 11: Ezekiel Elliott #21 of the Dallas Cowboys runs with the ball in the fourth quarter a game against the Houston Texans at AT&amp;T Stadium on December 11, 2022 in Arlington, Texas. (Photo by Sam Hodde/Getty Images)

They’re usually so far out of the AFC South race by then that mock drafts are the only postseason scenarios that matter to the small-market franchise. But having won three of their last five games — combined with Tennessee’s three-game skid — the Jaguars (5-8) suddenly find themselves in the playoff picture late.

The Cowboys and Jaguars both have something at stake when they meet in Jacksonville on Sunday for the first time since 2006. Dallas can clinch a postseason berth for the second consecutive year, a feat "America’s Team" last accomplished in 2007.

The Cowboys have won four in a row, including the last two against Indianapolis and Houston from the AFC South, and six of seven to gain a stranglehold on an NFL wild-card spot. NFC East-leading Philadelphia remains within reach, too, but Dallas needs help — and really needs to avoid a letdown in Jacksonville.

"December football is just about doing the right things, small things right," said Cowboys pass rusher Dante Fowler, who is returning to the team that drafted him third overall in 2015. "At this point, I feel like the only way to beat us is if we beat ourselves. So, we just have to stay on the small things and all the little things don’t have to take care of themselves."

The Cowboys will look to clinch a spot in the playoff with a win over the Jaguars.