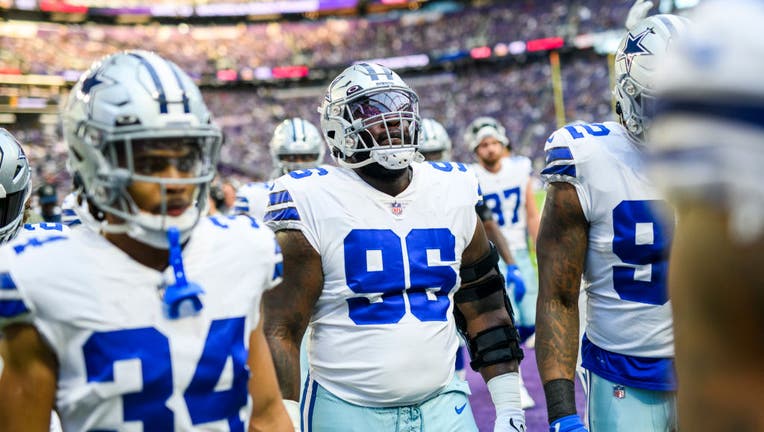 MINNEAPOLIS, MN - NOVEMBER 20: Neville Gallimore #96 of the Dallas Cowboys heads to the locker room before the game against the Minnesota Vikings at U.S. Bank Stadium on November 20, 2022 in Minneapolis, Minnesota. (Photo by Stephen Maturen/Getty Ima

ARLINGTON, Texas (AP) - Dak Prescott and the Dallas Cowboys channeled the anger from a collapse one week into the biggest road rout in club history the next.

Now they’re thinking about building on all the things that went right while the opponent tries to figure out what went wrong.

Not much else is similar for this pair of playoff contenders, the Cowboys are healthy and appearing primed to get on a roll, the Giants sputtering and dealing with injuries.

Dallas blew a 14-point lead entering the fourth quarter for the first time in franchise history in an overtime loss at Green Bay before one of its most dominant performances in a long time in a 40-3 victory at Minnesota.

Prescott is finding a rhythm after missing five games with a fractured thumb on his throwing hand, surrounded by a mostly healthy roster with plenty of playmakers on defense, too.

"I think coach (Mike) McCarthy said it best," Prescott said. "Take a picture of what it felt like, of what it looked like when we were at our best. And when you’re not, remind yourself or do the things that are necessary to get back to that."

The Cowboys will look to get a winning streak going again when they take on the Giants.