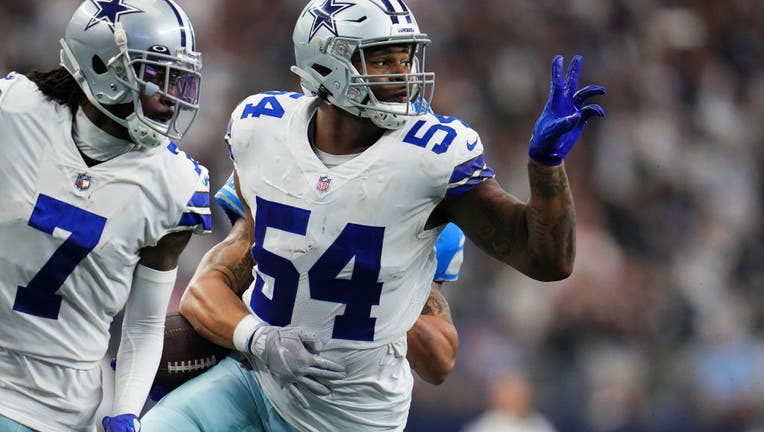 ARLINGTON, TX - OCTOBER 23: Sam Williams #54 of the Dallas Cowboys runs the ball against the Detroit Lions at AT&amp;T Stadium on October 23, 2022 in Arlington, Texas. (Photo by Cooper Neill/Getty Images)

ARLINGTON, Texas (AP) - Justin Fields might be in his best groove yet in his second season as Chicago’s quarterback.

Dak Prescott is trying to find his next one with the Dallas Cowboys in his second game back after missing five with a fractured right thumb.

The Bears face another tough road game against the Cowboys on a short week after winning in New England for the first time in franchise history.

Fields has a shot at his first back-to-back road victories Sunday after arguably his most complete performance during Monday night’s 33-14 win over the Patriots.

"It doesn’t really change my confidence," Fields said. "I just hope it gives us momentum to keep going, keep pushing."

Fields had 82 of Chicago’s 243 yards rushing with a touchdown and was 13 of 21 for 179 yards passing with a TD and an interception as the Bears (3-4) moved the pocket and used designed QB runs.

Although the former Ohio State star struggled the previous game in a loss to Washington, he had career highs in completion rate (71.4%) and passer rating (118.8) in a Week 5 loss to Minnesota.

"I think he’s clearly playing with more confidence than I recalled last year," Cowboys coach Mike McCarthy said. "You can see he’s a very gifted athlete, can make all the throws, and I think like anything finding their sweet spot of how to play him, how he fits with the perimeter players."

Prescott was understandably ragged early in a 24-6 victory over Detroit in his first game since breaking the thumb on his throwing hand in a season-opening loss to Tampa Bay.

But the 2016 NFL Offensive Rookie of the Year was 7-of-8 passing with a touchdown in the fourth quarter as the Cowboys (5-2) pulled away, once again leaning on one of the league’s best defenses.

"I’m definitely more comfortable in just having more reps at it, more practice reps," Prescott said. "This team can win in a lot of different ways, and I think it’s just a chance for us to show it."

Prescott now faces the NFL’s No. 2 pass defense, although the Bears gave up an important part of that group this week by sending defensive end Robert Quinn to Philadelphia, Dallas’ undefeated NFC East rival.

Although the 32-year-old former Cowboy is off to a slow start with just one sack, Quinn broke Pro Football Hall of Famer Richard Dent’s franchise record with 18 1/2 sacks last year.

"I was obviously happy about it then I find out where he went and I went, ‘Uh-oh,’" McCarthy quipped. "We have a lot of respect for Robert. It’s not going to change their defense, so our approach won’t change."

The Cowboys will look to get a winning streak going again when they take on the Bears.