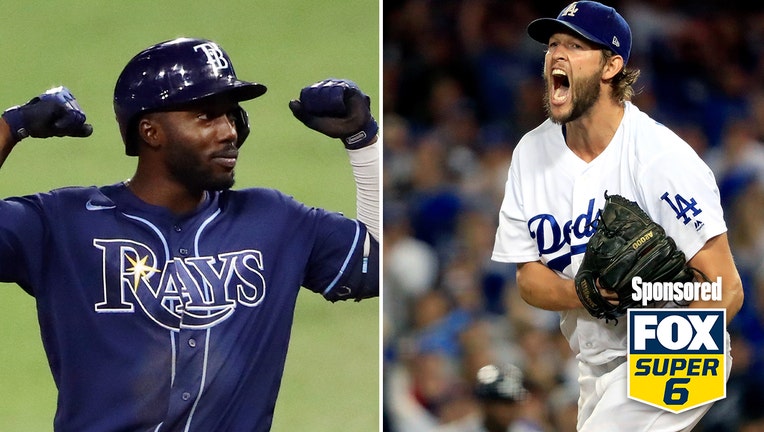 LEFT: Randy Arozarena #56 of the Tampa Bay Rays celebrates a single against the Houston Astros during the ninth inning in Game Three of the American League Championship Series at PETCO Park on October 13, 2020 in San Diego, California. (Photo by Ezra

In the abnormal season in Major League Baseball, the teams with the best regular season records in the American and National Leagues have found their way to the World Series.

And when the Tampa Bay Rays and Los Angeles Dodgers begin the Fall Classic on Tuesday night, they can help you be a big winner as well.

With the FOX Super 6 you could win up to $25,000 by correctly answering six questions about the game, which will be seen at 7:30 Tuesday night on FOX. Just download the FOX Super 6 app on your phone and mobile device, make your picks before first pitch and watch the action.

The Dodgers are making their third World Series appearance in the past four seasons but are still looking for the first World Championship for the franchise since 1988. Meanwhile, the Rays are returning to the Fall Classic for the first time since losing to the Philadelphia Phillies in five games back in 2008. Tampa Bay has never won a World Series since coming into the Major Leagues in 1998.

Here are some of the questions that you could win on FOX Super 6 for Game 1 on Tuesday night.

What is the total of hits, runs and RBIs for Mookie Betts?
The answers range from zero to five plus for the Dodgers outfielder and former MVP, who was great with the glove in the National League Championship Series win over Atlanta and who finished with a .269 average with one RBI in the series.

How many total runs will be scored in the game?
The choices range from 0-5 runs, 6 runs, 7 runs, 8 runs, 9 runs or 10+ runs. Given the way that both teams have hit home runs in the playoffs- the Dodgers had 16 homers against the Braves, the Rays had 11 in a seven-game win over the Astros- the temptation may be to go with a big number. However, keep in mind the respective pitching staffs are the best around.

What will be the highest-scoring inning?
The options are first-second, third-fourth, fifth-sixth, seventh, eighth, or the 9th/Extras.  Both teams have been known for some late-inning excitement and Game 1s tend to usually have a feeling out process to them. So, don’t rule out some late-inning thunder.

How many total strikeouts will there be in the game?
The options are 0-8, 9, 10, 11, 12 or 13+ Given how much both teams rely on home run balls, the number of strikeouts tend to go up. Expect a double figure combined total for the way that these two teams attack the baseball – and often miss.

How many runs will be scored after the 6th inning?
In the National League Championship Series, the Dodgers scored 12 runs after the 6th inning while the Rays scored only six. Tampa Bay’s bullpen, however, is viewed as one of the strongest in baseball and will have the benefit of two days of rest during the Series- something that wasn’t in play in the ALCS schedule. (The totals are 0, 1, 2, 3, 4, and 5+).

Choose team to win and by how many runs?
Since 2000, the team that has won Game 1 of the World Series has gone on to win the Fall Classic 16 of the past 20 times. (The only exceptions were 2002, 2009, 2016 and 2017). The Dodgers are riding a ton of momentum after rallying from 3-1 down to arrive back at the doorstep of a championship. The Rays, however, have the best young pitching in the game. Something has to give.

Don’t miss out on your chance on FOX’s Super 6 for the first game of the World Series. You could win $25,000 with six correct picks. Make sure you make your Game 3 picks today. It’s free!