DALLAS - On draft day, when the call comes, Danny Gray knows he will be a puddle.

"I know I’m gonna cry no matter how tough I try to be," said Gray. "I’m gonna be a crybaby on that day."

What would be behind those tears?

Gray’s story is one of hope, one of making it out of a neighborhood where he says there is a lot of pain.

"I feel like I just – I jumped a very large fence. A fence that has spikes, slippery slopes."

At a time, he had no hope for his NFL dream.

"I felt like it was over for me," said Gray.

Instead, he’s found his way – with help from people like the man he calls uncle – Keldrick Barron.

"There’s a story like this every year because there’s a kid every year that did everything in their power to get to this moment, even though everything was stacked against them," said Barron.

Barron isn’t a blood relative of Danny’s but he’s been one of the most important father-figures in his life.

Their relationship started when Barron coached Gray as a five-year-old in Pop Warner. Barron was the one who gave Danny his speedy nickman.

"Missile. Because that’s how he played."

For Danny, having a man like Kel to look up to was vital.

"I grew up in a seven-person household. Mom worked as a nurse. She was a single parent doing the best that she could to take care of me and all my other siblings," remembers Gray. "[She] worked 16-hour shifts, 22-hour shifts."

At 14-years-old, Danny chose family over school – staying home to raise his two baby younger siblings and missing almost all of his freshman year at Lancaster High School.

"I had to grow up real early," said Gray. "Had to be a man, had to take care of responsibilities real early."

"When you have a lot of responsibility, it normally comes with a lot of freedom," said Barron. "Teenagers, I don’t feel like need that type of freedom. Normally that’s when the bad stuff starts to happen. Nobody’s keeping you a kid – you’re getting sped up."

How far from a path to the NFL did Gray feel?

"The NFL dreams was - felt out of reach to me at that point," said Gray.

It was at that time, Danny reached out to Kel with a text message that changed his life.

"He told me he was tired of people saying he wasn’t going to be nothing," remembers Barron.

"He was there the next day," said Gray. "He told me to pack my clothes. Him and my mom, they talked. I moved in with him. He got me back in school two days after."

Why take Danny in?

"Because he wanted it. For him to be that open and honest – you don’t get that kind of honesty from 14-year-olds that often."

At the time, Barron already had five kids.

In their house in the east Dallas projects, Barron and his family helped Danny believe that he could be something.

"I knew he was going to have this moment," said Kel. "I’ve been speaking this into that kid since he was 14 years old."

Gray switched to James Madison High School and got back to climbing for his dreams.

As a junior, he won the state title in the 100-meter dash.

On the football field, he was a star, signing to play football at the University of Missouri.

And in the classroom, he made honor roll and scored well on the SAT.

But then, that fence got in his way again.

"They say your past it follows you."

Because of the credits he missed during his freshman year at Lancaster, Danny was ruled an academic non-qualifier.

He was ineligible to play NCAA Div. I football. 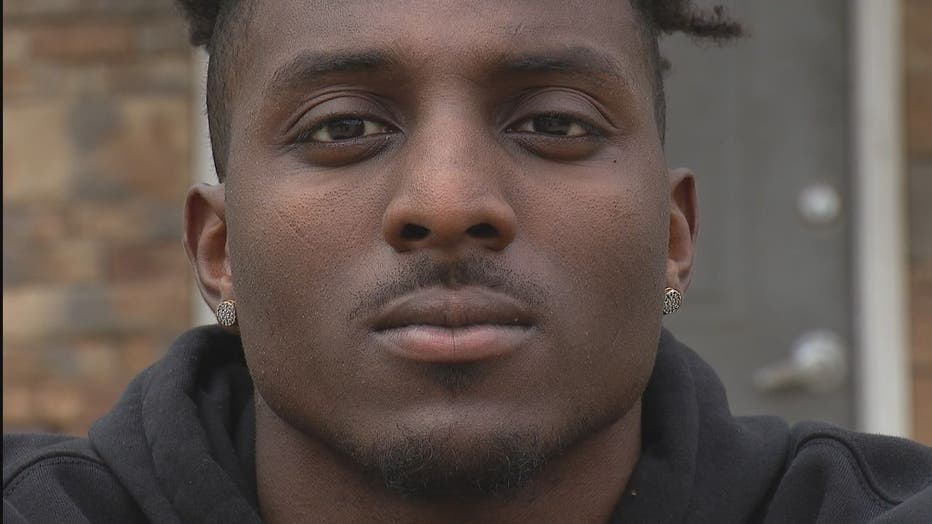 Danny Gray has overcome a time when he had no hope for his pro football dreams, to now reach the NFL Draft and represent hope for the Dallas community where he grew up.

"Once again it made me feel like I was a failure."

Once again, Danny figured out a way to find his way. Instead of Missouri, he played at Blinn College, a JUCO program.

Then he came home to suit up for SMU. Last season, Gray led the Mustangs in receiving yards and touchdowns. That earned him a trip to the NFL Combine.

Now, the football dream that once felt out of reach, is finally within grasp.

"It felt impossible," remembers Gray. "And I just turned the impossible into possible."

"Yeah my life could’ve went left if it wasn’t for the help that I had."

For the people who truly love him, the NFL Draft is just a bonus.

"We were going to be around [for him] regardless," said Barron.

They know this is just chapter one of the Danny Gray story.

"I wish there was a story like this every day," said Barron.

And what Kel has done for Danny, is something Gray will pay forward.

A gift Gray plans to use to help the next kid climb that fence.

"I had a friend tell me one time, ‘Kel, you can’t save everybody,’" said Barron. "If you can save one, you did the job."

"There’s a whole bunch of kids out here who, unfortunately, he won’t impact. But if he can snatch one, he did the job."How Dallas' Danny Gray reached NFL Draft: "I just turned the impossible into possible."