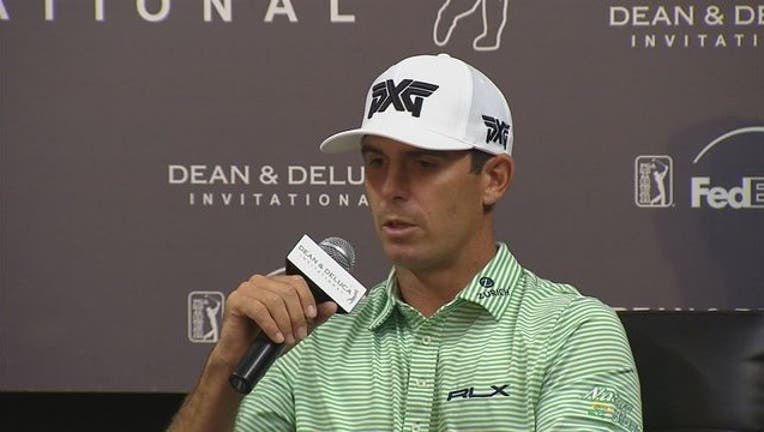 FORT WORTH, Texas (AP) - Billy Horschel was playing in a charity golf tournament a day after winning the Byron Nelson when his wife asked him to read a personal message she was ready to post on social media.

The PGA Tour player's initial reaction to his wife, Brittany, was that she didn't have to go public about her alcoholism until she was ready to do so.

"It's unbelievable what my wife did. I honestly didn't know she was going to do it," Horschel said Tuesday.

In a poignant post Monday on Twitter, a day after Billy Horschel's first PGA Tour victory since the end of the 2014 season, Brittany Horschel revealed that she is battling alcoholism. She said she spent more than two months at a treatment center last year, and just last weekend marked the one-year anniversary of her sobriety.

That post came a day after Billy Horschel vaguely made reference to a struggle away from golf when talking about his emotions of winning again.

"I obviously mentioned something about the last year ... but we can dip, dive and dodge around these questions no problem, and we can wait until you're ready," Horschel told his wife. "She said, 'No, I'm ready. I'm ready to share our story and start helping people.'"

During a previously scheduled news conference before playing in his first Colonial, Horschel initially read from a prepared statement. He said his family is like many families struggling with any variety of issues, but that his is more in the public eye.

"(That) provides us with an opportunity to speak out about the very real struggles of battling addiction," he said. "It can be a very lonely disease, and there is a stigma out there that leads many not to ask or accept the help they need."

Horschel said their hope is that by sharing their story that they can help other people and families struggling with addiction.

Brittany Horschel said in her post that her husband respectfully left her to answer it however she wanted, if at all.

"However, to not answer would not only be unfair to him, but to my own integrity," she wrote.

She added that her husband took full responsibility taking care of their first child, moving into a new home and competing on the PGA Tour while she was getting treatment last year.

"He silently battled through, with support from family and close friends, a very sad, scary and trying time," she wrote.

The first of their two daughters was born right as Horschel was winning the BMW Championship and the Tour Championship at the end of 2014 to capture the $10 million FedEx Cup.

Horschel hadn't won on the PGA Tour since, and missed four consecutive cuts before the Nelson, but he doesn't blame the off-course issues for not playing well the past year.

"That's not a reason at all. But it's something that's on my mind, something I think about on a constant basis," the 30-year-old Horschel said. "I've been a happy man. The last year has been one of the most enjoyable years of my life."

The Horschels have been married more than six years, and he said the past year has been one of the most enjoyable in their marriage.

"My wife is one year sober. The journey is not over, it'll never be," he said. "But we're on the right path, and every day we have challenges, just like everyone else in the world. ... We're just going day by day and staying on the path God has put in front of us."