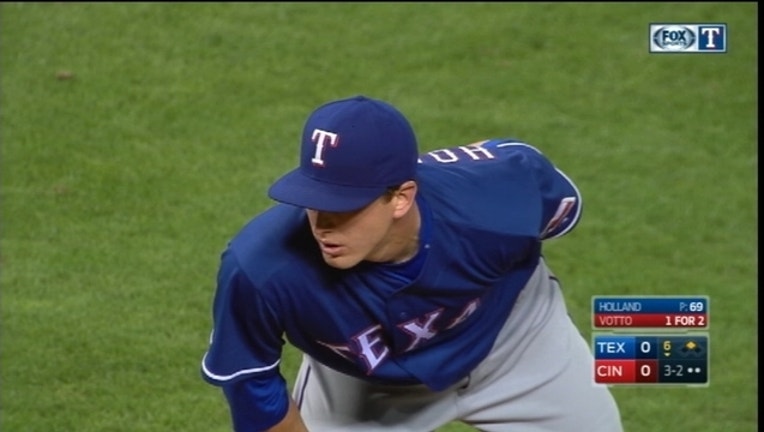 CINCINNATI (AP) — Dan Straily extended his surge since the All-Star break by pitching six innings and Joey Votto drove in a pair of runs to lead the Cincinnati Reds over the Texas Rangers 3-0 on Tuesday night.

A day after losing to the Dodgers 18-9, the Reds won a close one against a Rangers team that has been shut out three times in its last nine games.

Straily (10-6) hasn't allowed more than two runs in any of his eight starts since the break, going 6-0. He gave up three singles and two walks. Raisel Iglesias gave up two hits in the seventh but escaped the threat with two strikeouts.

Tony Cingrani gave two walks in the ninth before retiring Ryan Rua on a grounder to complete his 16th save in 21 chances.

Votto singled home a run in the sixth off left-hander Derek Holland (5-6), who had been on the disabled list since June 22 with an inflamed pitching shoulder. Holland gave up four hits and a walk in six innings. He also got his first major league hit, a single off the plate that bounced over Votto's head at first base.

Holland's only walk set up the run. He walked Tyler Holt — who pitched a perfect relief inning during Monday's lopsided loss — to open the sixth. Holt advanced on Billy Hamilton's sacrifice bunt and came around on Votto's single to right.

Tyler Barnhart doubled home a run in the seventh off Jeremy Jeffress. Votto added a sacrifice fly in the eighth off Matt Bush.

Hamilton made a diving catch of Carlos Beltran's fly to the track in left-center field to open the sixth inning, preventing a scoring opportunity.

The Rangers are making their first visit to Cincinnati since 2007. The Reds lead the interleague series 8-7.

The Rangers are 10-6 in interleague play this season, with their pitchers going 3 for 19 at the plate. The Reds are 5-11.

OF Carlos Gomez could join the club in Texas on Thursday. He signed a minor league deal on Saturday and is playing for Triple-A Round Rock. Manager Jeff Banister said he'll get a chance to play left field and right field.

The Rangers placed OF Josh Hamilton on unconditional release waivers, though they hope his left knee is healthy enough to allow him to try for a spot with the team next season. By making the move now, he's eligible to play for them all of next season. He had surgery on June 8 to reconstruct his ACL and repair cartilage damage.

Rangers: RHP Colby Lewis will pitch for Frisco on a rehab assignment Wednesday. He's been sidelined since June 25 with a strained back.

Rangers: Yu Darvish (4-3) is 2-0 in his last three starts with a 1.74 ERA. He has made six straight quality starts, matching the club high for the season.

Reds: Tim Adleman (2-1) makes his sixth career start and his first against the Rangers.