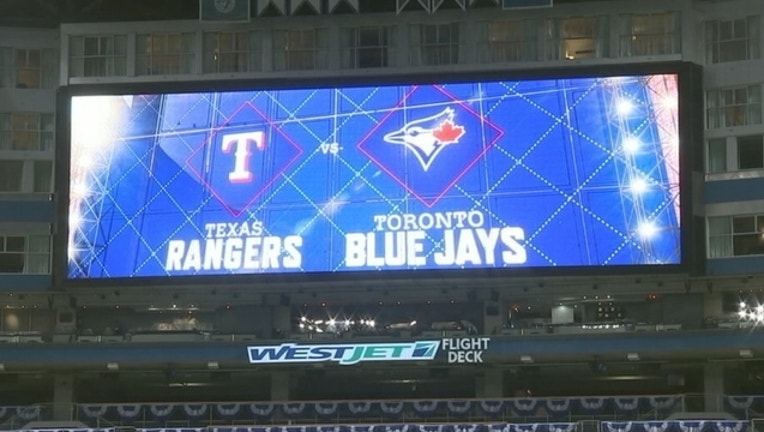 TORONTO (AP) -- For some pitchers trying to stop Josh Donaldson and the rest of the powerful Toronto Blue Jays, it's enough to take their breath away.

"You can't let up," Texas Rangers closer Shawn Tolleson said a day ahead of Thursday's AL Division Series opener. "There's no getting past one guy and taking an exhale. Definitely, that poses its challenges. It's not an easy lineup to just pitch around one guy and get to the next."

Still, in their final series of the regular season, a four-game showdown against the Los Angeles Angels, the Rangers' pitching staff got something of a warm-up for facing the bashing Blue Jays.

"We've tried to do a good job this season about keeping the mindset of never letting up," Tolleson said. "We had those same talks when playing Anaheim the other day, pitching to (Mike) Trout and (Albert) Pujols and then you face (C.J.) Cron, who had really hurt us a lot all season long."

"We talked about how you get Trout and Pujols out and you kind of take an exhale and then, before you know it, Cron hits a double off the wall or a home run. I think that kind of preparation is going to prepare us for this," he said.

Good practice, for sure, but Toronto's deep lineup will present even tougher challenges, with AL MVP candidate Donaldson followed by sluggers Jose Bautista and Edwin Encarnacion. Catch your breath while you can, because shortstop Troy Tulowitzki and catcher Russell Martin aren't far behind.

"Our lineup is legit," Donaldson said. "One through nine, I feel like we have probably the best lineup in baseball."

Tolleson wasn't about to argue.

"It's probably going to be more challenging than it would be going up against another team," he said.

Toronto was the only big league team to top 800 runs and outscored the Yankees, baseball's second-most prolific offense, by 127 runs. That's the biggest gap in the major leagues between the No. 1 and 2 offenses since 1953, according to STATS.

Texas finished third in the majors with 751 runs.

Toronto scored double-digit runs 26 times this season, the most since St. Louis and Atlanta in 2003 -- the tail end of the Steroids Era.

"The consistency, that's what blows you away," Blue Jays pitcher R.A. Dickey said. "Every team probably has five or six games a year where they score 10 runs, but we have an offense that has generated a lot of runs in a lot of games. It's a pretty consistent baseline that you're seeing."

Besides their big run output, Toronto's also led the major leagues with 232 homers, 852 RBIs and 570 walks.

"That's a great group of hitters," Rangers manager Jeff Banister said. "You've got to give them credit, you look at their numbers and what they've done, they speak for themselves."

Texas opens with right-hander Yovani Gallardo, who beat Toronto twice this season and didn't allow a run in 13 2-3 innings.

"I think we've come up with a good game plan, just being aggressive," Gallardo said. "Obviously they have a good lineup, a powerful lineup. With the catchers, we did a good job of making adjustments throughout the game whenever we had to."

Donaldson said Gallardo has become a different pitcher by improving his fastball command and adding a cutter to his arsenal.

"He's done a pretty good job of evolving himself into more of a complete pitcher," Donaldson said. "You have to take advantage of those mistakes that he's going to make, because he's not going to make a whole lot throughout the course of a game."

Toronto starts left-hander David Price, who went 9-1 with a 2.30 ERA in 11 starts after he was acquired from Detroit on July 30t.

"He throws 98 with a couple of off speed pitches. He hits his spots," Rangers designated hitter Prince Fielder said. "He doesn't mess around too much. He comes after hitters and he's not afraid of contact. He's a great pitcher, and it's going to be tough."

Price hasn't pitched since allowing five runs in five innings in a Sept. 26 start against Tampa Bay, an 11-day break between outings.

"If you can get these days off at this point in the season, that's good," said Price, who threw 220 1-3 innings during the regular season. "If you can come into the postseason with your body feeling the way I feel right now, that's a plus."