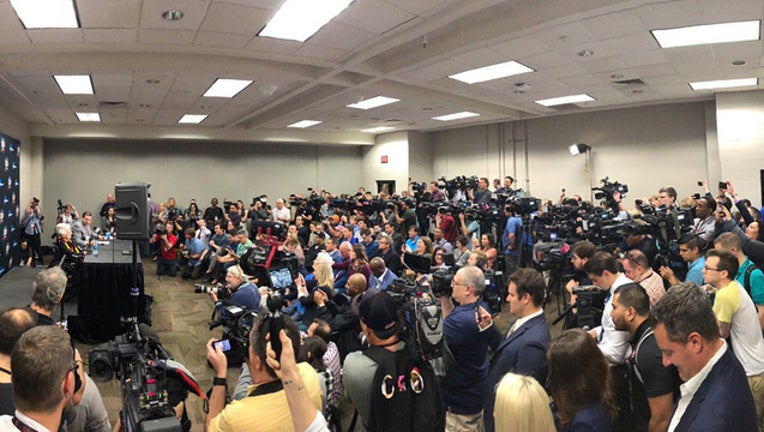 SAN ANTONIO (AP) - Who needs "One Shining Moment" when you've got Sister Jean?

The 98-year-old nun who has become the face of this most-inspiring NCAA Tournament held court on Good Friday in one of the best-attended news conferences ever held at the Final Four.

Hundreds of reporters and cameramen jammed in, elbow-to-elbow, in an interview room that would normally draw two dozen journalists for a player.

"I walked by, and I thought it looked like Tom Brady at the Super Bowl," Loyola-Chicago coach Porter Moser said.

It was more monumental than that.

This was the No. 1 fan of Moser and the Ramblers - the 11th-seeded team whose magical, miraculous run to the cusp of the title would've made for great theater, even without a nun.

Sister Jean Dolores-Schmidt has added a completely new, unexpected and, yes, wonderful twist to the proceedings. Her 15-minute Q&A on the eve of Loyola's game against Michigan illustrated precisely why.

She fielded questions about everything from whether God cares about basketball - "more the NCAA than the NBA" - some light trash talk with former Michigan star Jalen Rose's 100-year-old grandma - "Somebody said, 'Maybe you need a pair of boxing gloves' and I said, 'Well, we'll see what happens'" - and what it takes to really have your prayer heard - "God always hears, but maybe He thinks it's better for us to do the 'L' instead of the 'W,' and we have to accept that."

A lot has changed, Sister Jean says, since the Ramblers last made history - back in 1963 when they completed an equally unexpected run by knocking off Cincinnati for the national championship.

"I watched it on a little 11-inch black-and-white TV, and the game was (tape) delayed," she said. "And then everybody got out of the house and walked down the line on Sheridan Road, men and women together."

Sister Jean has been on a whirlwind since the Ramblers started this unexpected return to the college basketball promised land.

That this is all happening on Easter weekend makes it that much more hectic. But, as she has shown time and again over the past three weeks, sports and religion really can mix, so long as you keep everything in perspective.

"We're having a university Mass together on Easter Sunday," she said. "You know, I said Easter Sunday because we hope to stay, and we're confident enough we will."

Sister Jean is far from the only Catholic going for glory at this Final Four. On the other side of the bracket, the Catholic school, Villanova, is represented by Rev. Rob Hagan - aka Father Rob - who told The Associated Press the matchup is "kind of like fighting with your brothers and sisters. We're all in the same family."

Michigan coach John Beilein used a question posed to him about Sister Jean to remind folks that he, like the Loyola-Chicago players, is a product of a Jesuit education.

"And I had a priest, not even at my own parish, stop Mass and say, 'They have Sister Jean, you have everybody here praying for you,'" Beilein said. "It's been a lot of fun and it's great."

Not that this mix of sports and religion is particularly groundbreaking. Players thank God all the time, and more often than not, their prayers and thanks go largely ignored by the mainstream media and the fans.

But college basketball is going through some rough times these days, filled with dirty coaches and agents, payoffs to players and an FBI investigation that has unmasked corruption in many corners of the game.

Sister Jean's presence has reminded everyone that the game is about more than slam dunks, busted brackets, big money and the glossy "One Shining Moment" video that wraps things up at the end.

"It's just cool that everybody in the world knows who she is now, and they're starting to get to see how cool she is and how amazing she is," Ramblers guard Clayton Custer said.

On Friday, Sister Jean's 15 minutes of fame was just that: 15 minutes, and then it was time to move onto the day's regularly scheduled menu of interviews with coaches and players.

But she was having a grand time.

"I could stay for an hour," she said.

Spending an hour talking hoops with a nun?

Nary a soul objected.