Dak Prescott walked briskly and bounced up the couple of steps onto the stage for the announcement of the richest contract in the storied history of the Dallas Cowboys for their latest star quarterback.

FRISCO, Texas - Dak Prescott walked briskly and bounced up the couple of steps onto the stage for the announcement of the richest contract in the storied history of the Dallas Cowboys for their latest star quarterback.

It was five months almost to the day Wednesday since the gruesome ankle injury that ended Prescott's 2020 season and led to immediate questions whether the big payday would ever come after a long stalemate.

The answer came two days earlier when the sides — two years after they started talking —- agreed on a $160 million, four-year contract with the NFL's second-highest annual average behind Kansas City star Patrick Mahomes.

Now Prescott is ready to answer the questions about coming back from the compound fracture and dislocation of his right ankle against the New York Giants on Oct. 11.

"I thought about jogging out here and jumping up on the stage," said Prescott, who broke into a wild smile while crossing the stage at team headquarters in Frisco, north of Dallas. "But I don’t know if you all are ready for that. But I’m healthy."

Prescott wouldn't put a timeline on when he would be fully cleared, but said, "I'll be ready when it matters."

For now, Prescott was basking in the hourlong news conference that served as a celebration of the fourth $100 million contract in club history. The first was quarterback Tony Romo, whose back injury in the 2016 preseason opened the door for Prescott to be the starter from the first game of his rookie year.

Prescott's contract included NFL records with a $66 million signing bonus and a first-year value of $75 million. There is a no-trade clause, and the Cowboys can't use the franchise tag after the contract. This agreement came a day before a deadline for the Cowboys to place the tag on Prescott for a second consecutive season. 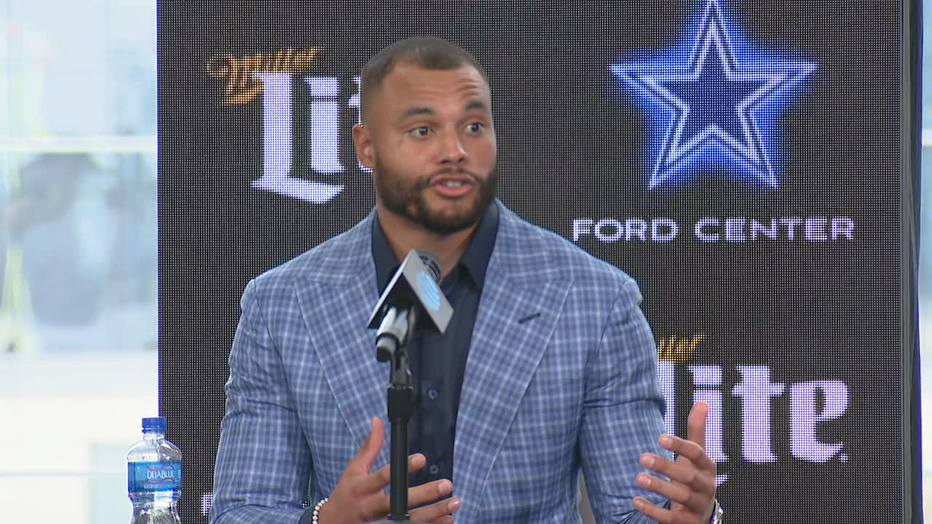 Most importantly for the Cowboys as they try to end a 25-year run without even reaching the NFC championship game, Prescott's salary cap hit will be $22.2 million instead of $37.7 million under the tag. Dallas needs help on defense and now has some money to spend.

"I feel great about our future," owner Jerry Jones said. "I don’t mind telling you the main reason I feel great is the guy sitting right next door to me."

Before the injury, Prescott had started every game since the beginning of his rookie year after Romo got hurt. Prescott was the 2016 NFL Offensive Rookie of the Year while leading the Cowboys to the No. 1 seed in the NFC, and two years later won his first playoff game while reaching his second Pro Bowl.

Negotiations on a new contract started the following offseason, when Prescott was going into the final year of a four-year deal that paid him a total of about $4 million as a fourth-round pick. That included $2 million in the final season.

Prescott's abbreviated 2020 season was on a $31.4 million franchise tag, and playing on a second tag would have significantly increased the chance of the 27-year-old QB leaving in free agency next year.

"Never in a million years did I imagine not being a Cowboy once I put on this uniform and put on this star," Prescott said. "So through it all, through the two years I guess you can say or more, there was never a slight doubt in my mind that I wouldn’t wear the star for the rest of my life."

Even before Prescott’s injury, the Cowboys started slowly in coach Mike McCarthy’s first season. But Prescott was still leading the NFL in yards passing for the league’s No. 1 offense. Those numbers plummeted as Dallas lost its first four games without Prescott, falling to 2-7 on the way to a 6-10 finish.

With the big contract, Prescott becomes the focal point of ending by far the longest stretch in franchise history without reaching a Super Bowl — more than twice as long as the 10 years it took Dallas to go from an expansion team to its first Super Bowl appearance during the 1970 season.

Since going 13-3 as a rookie, Prescott's regular-season record is 29-24. And he will be trying to end a two-year run of missing the playoffs, which last happened to the Cowboys in 2013.

"Eagerness, excitement, anxiousness, to give this organization and the Jones family everything they invested in," Prescott said. "That’s a Super Bowl, and that’s to go win."