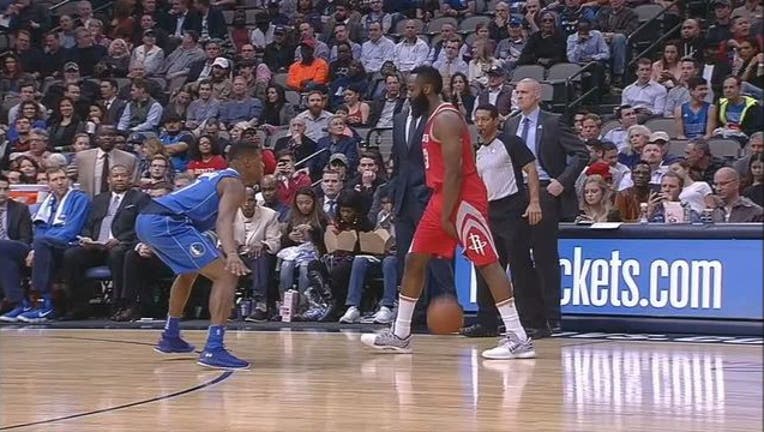 Trevor Ariza had 23 points as the Rockets beat their Texas rivals for the sixth straight time, a streak that started with a four-game sweep last season. Houston won its fourth straight game and seventh in the past nine.

Eric Gordon scored 17 points on 4-of-7 shooting from 3-point range. Southwest Division-leading Houston was up and down from beyond the arc, going 10 of 14 in the first quarter and 2 of 15 in the second.

Wesley Matthews matched his season high with 29 points for the Mavericks, who lost for the seventh time in 10 games since a season-best four-game winning streak that helped lift them out of last place in the West. Yogi Ferrell scored 19, going 4 of 5 from long range.

Ariza, who combined with Harden and Chris Paul to go 9 of 10 from 3-point range in the first quarter, was suspended two games for entering the Clippers' locker room after a feisty game in Paul's first game against his former team since the offseason trade that sent him to Houston.

Clint Capela had 16 points and 13 rebounds. That included an alley-oop dunk on a pass from near midcourt by Harden in the fourth quarter, when the Rockets took their biggest lead at 20 after a 15-point edge in the first 6 minutes was cut to six at halftime.

Rockets coach Mike D'Antoni wasn't thrilled that Paul was left off the All-Star team. The nine-time All-Star missed 14 games with a left knee injury and another three with a left abductor strain. But the Rockets are 24-5 in games he has played, and won his first 15 starts. He entered the Dallas game averaging 19.1 points, 8.9 assists, 5.9 rebounds and 1.9 steals per game. "People that should be watching games don't watch the games and see how important a guy is," D'Antoni said. "It's perplexing."

Rockets: Capela extended a career best with his 11th straight double-digit scoring game, and the Rockets improved to 16-2 when he scores at least 15. ... Houston was just 11 of 23 on free throws, in part because Harden, an 87 percent free-throw shooter, matched his season low with two attempts.

Mavericks: Rookie PG Dennis Smith Jr. was chosen for the Rising Stars game, and coach Rick Carlisle has been campaigning for him to be in the dunk contest during All-Star weekend. Smith is among rookie leaders in points, assists and steals. ... G Kyle Collinsworth was signed to a second 10-day contract. ... G Devin Harris, who has been in the concussion protocol, missed his second straight game and will be out at least two more, coach Rick Carlisle said. ... Dirk Nowitzki scored seven points in a season-low 15 minutes.

Rockets: At New Orleans on Friday.

Mavericks: Portland at home on Friday.