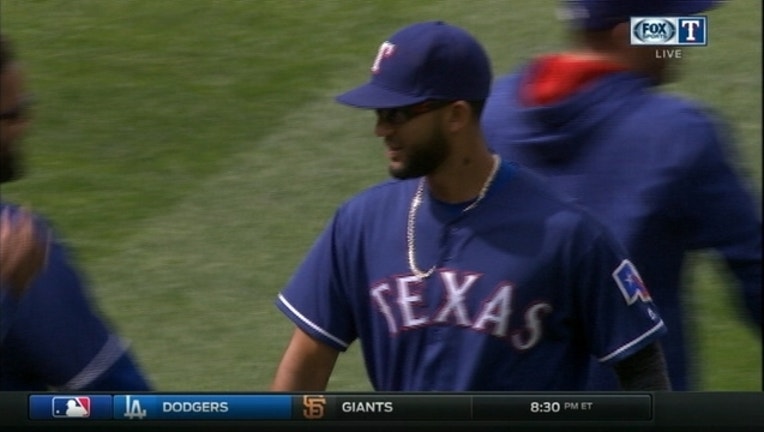 SEATTLE (AP) — Cole Hamels became the seventh active pitcher to reach 2,000 strikeouts and Mitch Moreland homered to lead the Texas Rangers to a 6-4 win against the Seattle Mariners on Sunday.

The AL West-leading Rangers took two out of three games in the series against second-place Seattle to open up a season-high five-game division lead. The Rangers have won seven straight series and 12 of their last 15 games.

Hamels (6-1) picked up strikeout No. 2,000 in the third inning when he got Leonys Martin swinging. It was one of five strikeouts for Hamels, who allowed one run on four hits in seven innings.

Hamels has now lasted seven innings in each of his last three starts, although he ended up with no-decisions in the previous two. Hamels has won nine straight decisions against AL West opponents, and has won four straight against Seattle. He has given up one run or less in four of his 13 starts.

Martin homered for the Mariners, who have now lost eight of their last 12 games. The solo shot in the fifth inning was Martin's 10th home run of the season.

The Rangers took a 3-0 lead in the fourth inning. Elvis Andrus hit a run-scoring double down the third-base line, followed by Moreland's two-run home run. It was Moreland's ninth homer and third of the series — he hit two against the Mariners on Friday.

Texas picked up another three runs in the sixth. Andrus hit a RBI single, and Ian Desmond singled with the bases loaded to drive in two more.

The Mariners showed some offensive life in the eighth inning after Hamels left, helped out by the Rangers bullpen. With two outs and the bases loaded, Jake Diekman hit Kyle Seager with a pitch and then walked Chris Iannetta two give Seattle two runs before Martin grounded out to end the inning.

Sam Dyson pitched the ninth for his 10th save. Dyson gave up a run-scoring single to Robinson Cano with two outs, but Cano was thrown out trying for a double to end the game.

Rangers: Starter Yu Darvish, who was scratched from his scheduled Monday after feeling neck and shoulder tightness during a throwing session Saturday, will get an MRI and evaluation by team physician Dr. Keith Meister on Monday. ... 3B Adrian Beltre has not played since leaving Wednesday's game with a left hamstring strain.

Mariners: OF Nori Aoki was out of the starting lineup after being hit on the right knee by a pitch in Saturday's game, but he did pinch hit in the ninth inning.

The Rangers released Ike Davis from his minor league contract Sunday. Davis, a six-year major league veteran, started the year with Triple-A Round Rock after a mild right knee sprain limited his time in spring training. Davis hit .268 with four home runs and 25 RBI in 39 games with Round Rock.

Rangers: Texas has not named a starter for Monday's game at Oakland to replace Darvish. Long reliever Cesar Ramos, who has made three starts for the Rangers, is expected to get the start, although RHP Kyle Lohse was scratched from his scheduled start for Triple-A Round Rock on Sunday and would be available. Ramos is 1-1 with a 2.76 ERA in his three starts this year, and is 1-3 with a 3.58 ERA overall in seven appearances.

Mariners: RHP Taijuan Walker (3-6, 3.48 ERA) will start against Tampa Bay on Tuesday to start a 10-game road trip for Seattle.