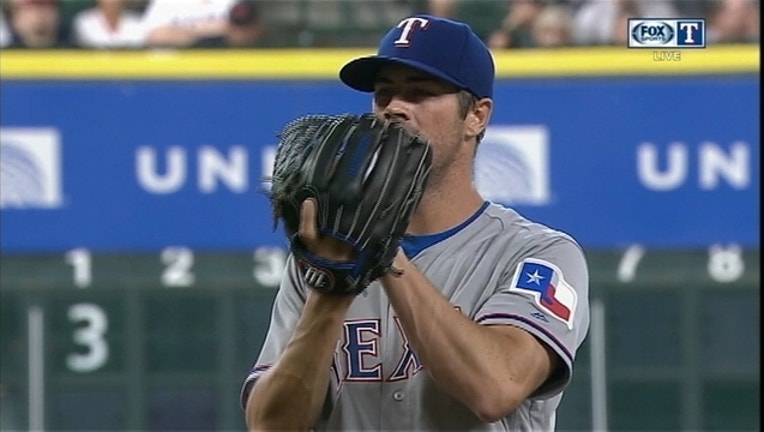 ST. LOUIS (AP) — Cole Hamels has been a road warrior for the Texas Rangers.

Hamels pitched 7 2/3 innings and Rougned Odor homered as the Rangers beat the St. Louis Cardinals 1-0 on Friday night, improving to 6-2 on their 10-game trip.

Hamels (7-1) allowed three hits while striking out six and walking three. It was his longest scoreless outing of the season and longest since he threw a no-hitter against the Chicago Cubs on July 25, 2015, as a member of the Phillies.

"I think I was able to execute pitches with a little more authority," Hamels said. "It does help when you have some velocity behind some of your pitches, you can get away with some of your mistakes. I felt like I was really down in the zone and on the outside parts of the zone. I wasn't really down the heart of the plate much tonight."

Hamels improved to 5-0 on the road and lowered his road ERA to 1.64 this season. He turned in his fourth consecutive quality start.

Hamels scattered five baserunners and allowed only one to reach second.

"All my pitches seem to do what I want them to do," Hamels said. "It's just a matter of now going out there and executing pitches. When you have the purpose behind it, then it's just letting it happen. I think that's' what I've been able to build off of every game this month."

"I just can't let Colby walk away and make it easy. I've got to challenge him. I think for us we like to feed off each other," Hamels said. "We're trying to push each other and help this team out the best we can."

Odor homered on the first pitch he saw in the fifth, hitting it 433 feet to straightaway center. It was Odor's third homer in as many games and the 19th for the Rangers in their last eight games.

Sam Dyson picked up his 12th save.

The Rangers have won four straight, improving to an AL-best 43-25. Texas improved to 4-0 all-time at Busch Stadium in the regular season and is a win away from winning a franchise-record eighth consecutive series.

Michael Wacha (2-7) lost a career-high seventh straight decision, despite allowing one run over 7 2/3 innings. He is the first Cardinals starter to lose seven straight decisions since Kip Wells in 2007.

It was the second straight quality start for Wacha, who gave up two runs in seven innings on Friday at Pittsburgh.

Matt Carpenter was the lone Cardinal to have success against Hamels, reaching all four times on two hits and two walks.

After reaching a season-high seven games over .500 on Sunday, the Cardinals have lost three straight and fell to 15-19 at home.

"It comes down to Hamels," Cardinals manager Mike Matheny said. "He made good pitches. He was working early in the count, got early outs cause you know you don't want to sit back and wait there and wait till you're 0-2. Guys are up there aggressive looking for pitches that they can drive and he had just enough movement."

The Cardinals recalled 2B Kolten Wong and optioned OF Jeremy Hazelbaker to Triple-A Memphis. Wong hit .429 with four homers and 11 RBI in seven games at Memphis and he also played center field in three of those games.

Cardinals: RHP Seth Maness (elbow) threw a scoreless inning at Triple-A Memphis on Thursday, his second in as many days.

Rangers: Martinez (1-1, 3.38 ERA), who was called up from Round Rock on June 14, will be making his first start this season in the second of a three-game series Saturday. He earned his first career relief win at Oakland on Wednesday.

Cardinals: RHP Carlos Martinez (7-5, 3.46 ERA) is coming off a career-high 8 1/3 innings and 122 pitches while allowing one run at Pittsburgh last Saturday. He will be making his first career appearance against Texas.