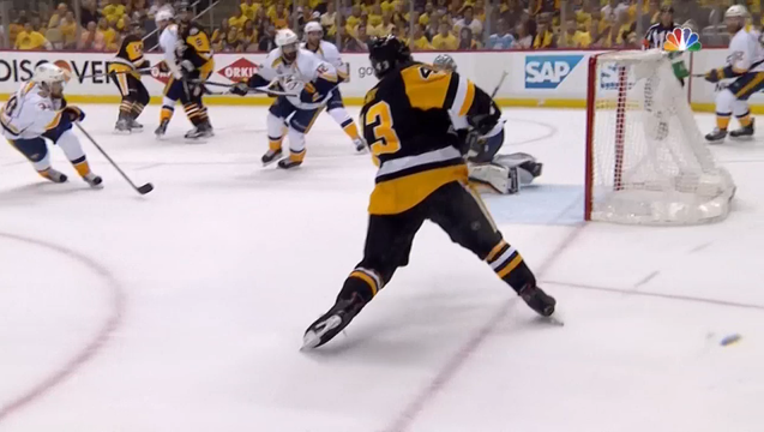 PITTSBURGH (AP) - This is what the Pittsburgh Penguins do. They find a way.

Even on nights when they blow a three-goal lead, they go an entire period (and then some) without registering a single shot and the opponent is fresher, quicker and, for long stretches, demonstrably better.

Maybe it's mystique. Maybe it's luck. Maybe it's a bit of both. What makes the defending Stanley Cup champions different from the 29 other clubs chasing them isn't the way they dominate when they play well. It's their ability to survive when they don't.

On nights like Monday in Game 1 of the Stanley Cup Final, when a brief early flurry led to a baffling lull only to end how so many games have ended for the Penguins over the last two springs: with the bigger number on the scoreboard next to their name and the guys on the other bench wondering how Pittsburgh got away. Again.

Rookie Jake Guentzel fired a shot by Nashville's Pekka Rinne with 3:17 left in regulation to put the Penguins ahead to stay in a flat-out weird 5-3 victory.

"None of us in our dressing room is fooled by the score tonight," Pittsburgh coach Mike Sullivan said.

Game 2 is Wednesday night in Pittsburgh.

The Penguins were outshot 26-12 and went 37 minutes without managing to get one puck on Rinne, the best goalie in the playoffs and the main reason the Predators are on their sport's biggest stage for the first time. And yet it didn't matter.

When Guentzel ended an eight-game goalless drought and Nick Bonino picked up his second goal on an empty-netter , the Penguins were in control as they try to become the first team since Detroit in 1998 to win back-to-back Cups.

"It's not textbook," said Pittsburgh captain Sidney Crosby, who picked up two assists. "We've got some things we need to improve on."

The Penguins will have the luxury of doing it with the lead.

Conor Sheary scored his first of the playoffs and Evgeni Malkin collected his eighth . The Penguins won despite putting just 12 shots on goal. Matt Murray finished with 23 saves for the Penguins, who used the first coach's challenge in Final history to wipe out an early Nashville goal and held on despite their astonishing shot drought.

"I think at the end of the day we're up 1-0," Bonino said. "We had a good first, we had a terrible second and we were terrible in the third. I don't think it's Xs and Os. We've got to work harder, compete a little harder, but we got some timely goals."

"It was a different game," Rinne said. "I can't remember facing that kind of game before."

The Penguins had all of three days to get ready for the final following a draining slog through the Eastern Conference that included a pair of Game 7 victories, the second a double-overtime thriller against Ottawa last Thursday.

Pittsburgh looked a step behind at the outset. The Predators, who crashed the NHL's biggest stage for the first time behind Rinne and a group of talented defenseman, were hardly intimidated by the stakes, the crowd or the defending champions, trying to become the first repeat winner since Detroit in 1998.

All the guys from "Smashville" have to show for it is their first deficit of the playoffs on a night a fan threw a catfish onto the ice to try and give the Predators a taste of home.

"I thought our guys played a great game," Nashville coach Peter Laviolette said. "We hate the score. We hate the result but we'll move forward."

Nashville was better from the opening faceoff but Pittsburgh managed to build a quick 3-0 lead anyway thanks to a fortunate bounce and some quick thinking by Penguins video coordinator Andy Saucier. Part of his job title is to alert coach Mike Sullivan when to challenge a call. The moment came 12:47 into the first when P.K. Subban sent a wrist shot by Murray that appeared to give the Predators the lead.

Sullivan used his coach's challenge, arguing Nashville forward Filip Forsberg was offside. A lengthy review indicated Forsberg's right skate was in the air as he brought the puck into a zone, a no-no.

"The impact of that moment and then the chain of events that happened after that with the penalty kills I think changed the course of the game," Laviolette said.

The decision gave the Penguins all the wiggle room they needed to take charge. Malkin scored on a 5-on-3 15:32 into the first, Sheary's first of the playoffs made it 2-0 just 65 seconds later and when Bonino's innocent centering pass smacked off Nashville defenseman Mattias Ekholm's left knee and by Rinne just 17 seconds before the end of the period, Pittsburgh was in full command.

It looked like a repeat of Game 5 of the Eastern Conference finals against Ottawa, when the Penguins poured in four goals in the first period of a 7-0 rout.

Nashville, unlike the Senators, didn't bail. They haven't at any point during their remarkable run. Why start now?

Ellis scored the first goal by a Predator in a Stanley Cup Final 8:21 into the second and Nashville kept Rinne downright bored at the other end. Pittsburgh didn't manage a shot on net in the second period, the first time it's happened in a playoff game in franchise history - and the first such period by any team in a Final game since the NHL began tracking shots on goal in 1958.

Nashville kept coming. Sissons beat Murray 10:06 into the third and Gaudreau tied it just after a fruitless Pittsburgh power play.

No matter. The Penguins have become chameleons under Sullivan. They can win with both firepower and precision.

Guentzel slipped one by Rinne with 3:17 to go in regulation and Bonino added an empty netter to give Pittsburgh early control of the series.

"We didn't do a great job of (shooting), but we made them count," Crosby said. "But it was a good finish there to get that one from Jake."

This story has been corrected to show Penguins shot drought was 37 minutes.