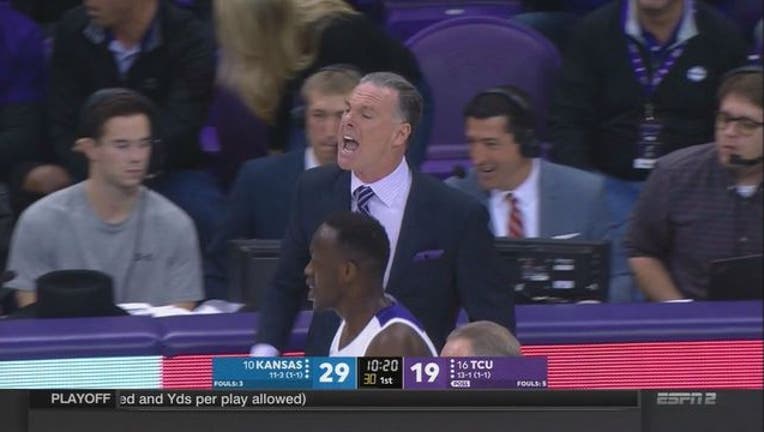 Vladimir Brodziansky had eight straight points for TCU to tie the game at 77-all before Marcus Garrett's two tiebreaking free throws put the Jayhawks ahead to stay with 3 minutes left. Graham then made all of his free throws down the stretch for the Jayhawks (12-3, 2-1 Big 12).

Svi Mykhailiuk added 20 points for Kansas, which was coming off a home loss to Texas Tech and avoided its first 1-2 conference mark since 1990-91. Udoka Azubuike had 14 points, but played only 13 minutes before fouling out.

It was the first meeting between the schools since TCU upset the then-No. 1 Jayhawks in the quarterfinal round of the Big 12 Tournament last March. The Horned Frogs went on to win the NIT championship, and started this season with a 12-game winning streak before losing two of its first three games in Big 12 play.

Kansas: The Jayhawks got off to a fast start, making 10 of their first 12 shots and building a 14-point lead less than 7 minutes into the game. The problem is they couldn't keep Azubuike on the court. The 7-foot center was 6-of-6 shooting, including inside shots for their first three baskets of the game. Back in after halftime, he also scored the first basket again - on a dunk after a bounce pass from Graham. But he fouled out with about 5 minutes left when he was trying to stop Brodziansky.

TCU: After falling behind by 10 again early in the second half, the Frogs bounced back and were within 48-47 when Bane beat the shot clock with a 3-pointer from the left side. But TCU then went cold from the field and did get even, or ahead, until the quick spurt by Brodziansky.

Kansas, which has already lost multiple home games for the first time in 11 seasons, plays three of its next four games at Allen Fieldhouse. The Jayhawks host Iowa State on Tuesday night.

TCU has seven more games in January, five of them on the road. The Frogs play at Texas on Wednesday night and at No. 7 Oklahoma next Saturday.