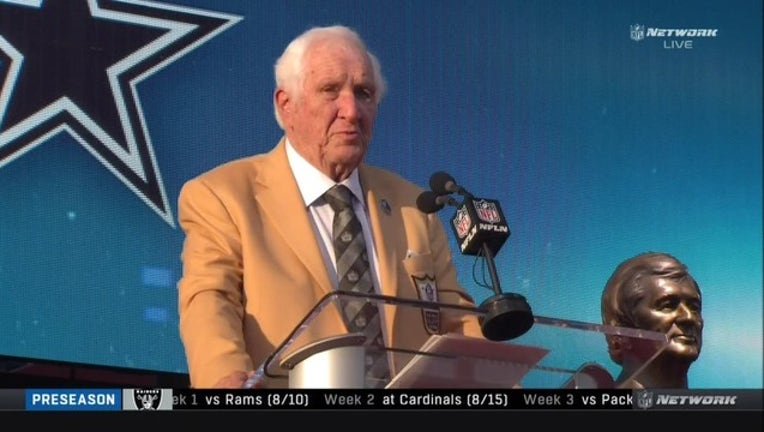 And what a challenge they had throughout their careers, trying to cover fellow inductee Tony Gonzalez.

All four entered the Pro Football Hall of Fame on Saturday night.

"Fitting to be in here with Mr. Johnny Robinson and Champ and Ty," Reed said. "My DBs know it was always about us."

Sort of. But Gonzalez, like Bailey elected in his first eligible year, showed how pro football could be all about the tight end.

A six-time All-Pro, Gonzalez helped revolutionize the position, lining up in traditional tight end spots as well as flanked out or in the backfield - pretty much everywhere on the field. Then he beat many of those defensive backs everywhere on the field in 12 seasons with Kansas City and five with Atlanta. He stands second in receptions with 1,325 only to Jerry Rice.

His final totals included 15,127 yards receiving and 111 touchdowns in the regular season. He made 14 Pro Bowls and the NFL All-Decade Team of the 2000s.

He particularly thanked his 101-year-old grandmother, his wife, who he said doesn't like football, and the fans in KC. Gonzalez was one of the most popular players in the entire league for those 17 seasons.

"After I was traded, I went back to play a game in Kansas City," he recalled. "During pregame they introduced me, which I thought was very special. Then something happened, one of the greatest moments of my career: The fans began yelling for me."

While Gonzalez, now a broadcaster, delivered a smooth speech until his eyes welled up when addressing his mother, Bailey, Reed and Law's voices frequently broke during theirs.

Law spoke of his family's support, and his hometown, Aliquippa, Pennsylvania, which also produced his uncle, Tony Dorsett, and Mike Ditka - both Hall of Famers.

"I know there ain't no crying in football," Law joked.

"We are a community built on love, strength, struggle, and that Quiptown pride," he said. "We did it, Aliquippa. We are in the Pro Football Hall of Fame."

Law became the first inductee from New England's standout defense that won three Super Bowls in the early 2000s. One of the most versatile and physical cornerbacks the NFL has seen, Law was selected for five Pro Bowl teams and was a two-time All-Pro. He finished with 53 career interceptions, twice leading the NFL in that category, had more than 800 tackles, 169 passes defensed, five sacks, and scored seven times.

Perhaps Law's most noteworthy game came in the 2002 Super Bowl, when his hard-hitting style upset Rams receivers and threw off the "Greatest Show on Turf. That was emblematic of his attacking style - and soon after led to rules changes limiting how physical defenders could be against receivers.

Reed was just as big a playmaker for Baltimore, a safety who fellow enshrinee Ray Lewis called "a gift" to the Ravens and himself. He was elected in his first year of eligibility, just as Lewis was last year, and called for unity in America, setting a standard like a team's - each pushing one another toward an achievement.

Reed, a five-time All-Pro safety and member of the NFL 2000s All-Decade Team, was the 2004 Defensive Player of the Year and made nine Pro Bowls. He had 64 career interceptions, seventh overall; led the NFL in picks three times; and his 1,590 yards on interception returns is a league mark. His 13 non-offense TDs rank fifth all time.

In 2013, in his hometown of New Orleans, the Ravens won the Super Bowl.

Bailey played for Washington and Denver in his 15-year career, and was a force in each of those seasons. He intercepted 54 passes, including one against New England he returned for 100 yards in the 2005 divisional playoffs.

A 12-time Pro Bowler, a record for the position, and three-time All-Pro who made the NFL's All-Decade Team of the 2000s, Bailey was the seventh overall draft pick by the Redskins in 1999. He was dealt to Denver in 2004 for running back Clinton Portis in a steal for the Broncos.

Bailey credited Hall of Fame cornerbacks Darrell Green and Deion Sanders, mentors with the Redskins, for setting his foundation in the pros. Yet he noted he was "consumed by the game" that "gives a person discipline and perseverance," but it doesn't prepare you for "real life."

Referring to his fellow African Americans, Bailey asked that everyone listen "when we tell you about our fears. ... When we tell you there are many challenges we face because of the color our skin, please listen. And please do not get caught up in how the message is delivered.

"If we start listening, there is no limit to the progress we can make."

"I learned to love the preparation, the plays and the puzzle," Mawae said. "I loved putting on my uniform and cleats. I learned to never step on the field without being ready to work."

Mawae was an outstanding center for three NFL teams, and a key union force during the 2011 lockout of players. His leadership, along with his talent and determination, made him a three-time All-Pro and eight-time Pro Bowler with the Seahawks, Jets and Titans, and the center on the NFL's All-Decade Team of the 2000s.

Offensive lineman rarely should be judged by statistics, but consider that Mawae blocked for a 1,000-yard rusher in 13 of his 16 seasons - by five different running backs, capped by the NFL's sixth 2,000-yard rushing performance, by Tennessee's Chris Johnson in 2009, Mawae's final season.

Mawae, who was presented by his wife, Tracy, is the first player of Hawaiian descent and the second Polynesian member of the hall, following the late Junior Seau. His speech paid warm tribute to his family and the inspiration and love they provided him.

"I knock on this door and I tell all of you," he concluded in his speech, "I am home."

Bowlen's Denver Broncos made more Super Bowls (seven, winning three) than they had losing seasons. Under Bowlen's leadership, Denver went 354-240-1 from 1984 through last season. He was the first owner in NFL history to oversee a team that won 300 games - including playoffs - in a span of three decades.

On the league level, the highly respected Bowlen, who died in June, worked on several influential committees, including co-chairing the NFL Management Council and working on network TV contracts such as the league's ground-breaking $18 billion deal in 1998.

Bowlen once said the Hall of Fame is where legends go. He's now there, with his children huddling around the bust on the stage, several of them patting it on the head.

Brandt has been in the NFL so long he scouted Robinson. Brandt was procuring talent for the Dallas Cowboys in their initial season of 1960 when Robinson came out of LSU as a running back and eventually became a star safety.

Finally, in 2019, they are wearing gold jackets.

"After all this time, I thought I had been forgotten," Robinson said. "To receive that knock on the door ... was surreal to me."

"What you do in securing talent is the lifeblood of football," he said. "Seeing that player that was something special ... or going to a D-3 campus and finding a diamond in the rough. I want all of you to look at my election into the Hall of Fame as a tip of the cap to you."

For six decades, Brandt has been involved in the sport at a high level, from personnel director with the Cowboys to league consultant to draft guru to broadcaster.

Brandt, who was enshrined as a contributor, developed the Dallas scouting system that emphasized computers far before most other teams; scouted the historically black colleges and small colleges for talent; made signing undrafted free agents a science; and worked with Hall of Famers Tex Schramm, the team president, and coach Tom Landry, to build a dynasty.

Robinson was passed over six times during the 1980s, but got in as a seniors committee nominee. He's one of 20 players to play all 10 seasons of the AFL, made 57 interceptions, went to seven Pro Bowls, received all-league recognition five times and was chosen to the AFL's all-time team.

He mentioned what his father told him before he headed to his first training camp after being the third overall draft choice in the AFL.

"Be a gentleman when you win, be a man when you lose," Robinson said, "if you lose, be sure that you work harder so it won't happen again."