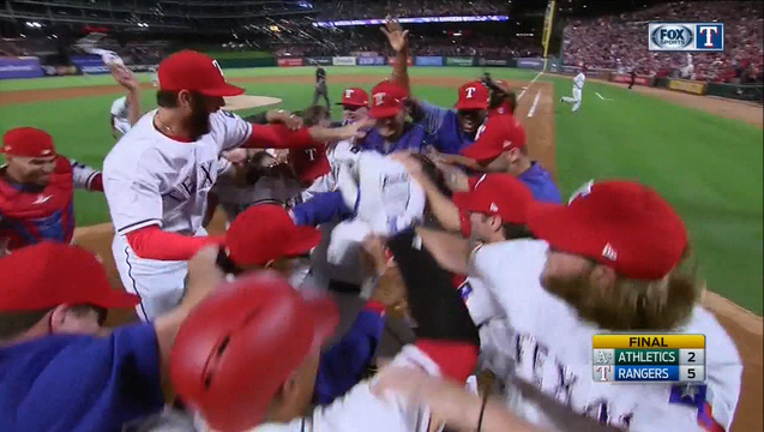 ARLINGTON, Texas (AP) - Joey Gallo hit a game-ending three-run homer and the Texas Rangers won with a four-run ninth inning for the second night in a row, this time beating the Oakland Athletics 5-2 on Friday night.

Gallo's 12th homer of the season, off A's closer Santiago Casilla (0-1), hit high off the foul pole down the right field line.

Jonathan Lucroy and Rougned Odor got the ninth started with consecutive singles. Mike Napoli, whose three-run homer ended a 5-2 win over San Diego on Thursday night, then hit a deep sacrifice fly to tie the game.

Odor was stopped at third when Carlos Gomez doubled into the right-center gap, but they all came home on Gallo's blast that gave the Rangers their fourth consecutive victory to match a season high.

This is the fourth time in Rangers' history they won consecutive games with walk-off homers.

Oakland starter Jesse Hahn pitched seven strong innings, limiting the Rangers to one run and four hits and left with the lead.

Pinch-hitter Mark Canha put Oakland up 2-1 in the seventh when he lined a double over the outstretched glove of 6-foot-5 third baseman Gallo and into the left-field corner. Trevor Plouffe scored from first, sliding into home about the same time that shortstop Elvis Andrus' relay throw arrived and flicked off catcher Lucroy's mitt.

Canha was hitting for Matt Joyce, whose homer in the fifth had put the A's up 1-0 before Texas got even in the bottom of the inning on Delino DeShields' squeeze bunt that drove in Gomez.

Gomez led off the Texas fifth with a double, went to third on Hahn's errant attempted pickoff throw, then scored with a great headfirst slide around the sweeping tag attempt by catcher Stephen Vogt while reaching out to touch the plate.

Rangers starter Andrew Cashner lowered his ERA to 2.43 by allowing only one run over six innings. But the Texas native is still without a win in six starts for the Rangers since signing with them during the offseason.

Cashner is the first Texas starter to allow three earned runs or less in each of his first six starts in a season without a victory since rookie Tommy Boggs' seven in 1976.

Athletics: C Josh Phegley, who took a ball off his mask May 3, was reinstated from the 7-day concussion DL. ... RHP Sean Manaea is scheduled to come off the DL on Monday to pitch for the A's at Seattle. He's been out since April 27 because of a strained left shoulder. Manager Bob Melvin said Manaea felt great in his last start during his rehab assignment.

Athletics: RHP Sonny Gray is 6-0 with a 1.45 ERA in six career road starts in Texas. Gray has eight wins overall against the Rangers since the start of the 2014 season, the most by any pitcher against them in that span.

Rangers: RHP Nick Martinez is winless in four starts this season, but he is 4-2 with a 2.34 ERA in 50 career innings against Oakland.