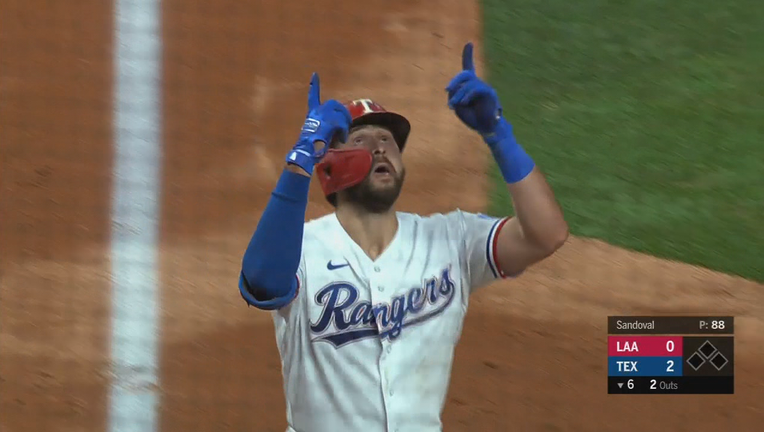 ARLINGTON, Texas (AP) - Joey Gallo hit a two-run homer after missing a game with a sore right wrist, six Texas pitchers combined on a four-hitter and the Rangers have consecutive wins for the first time this season after beating the Los Angeles Angels 2-0 on Saturday night.

Gallo texted manager Chris Woodward early in the day to let him know he was feeling better and ready to get back in the lineup after an injection for the pain.

“Good call getting him in there, because he won the game for us,” Woodward said.

Edinson Volquez (1-1), the first reliever after starter Kolby Allard’s five innings, worked the sixth for his first major league victory since 2017. It was his first win for the Rangers since 2007, before the former starter was traded to Cincinnati for Josh Hamilton. Rafael Montero worked a perfect ninth for his second save in as many nights.

The Angels are 5-10 under new manager Joe Maddon, matching the worst 15-game start in team history. They had been 5-10 five other times, most recently in 2013.

“If these things happen in the middle of the season and you’re doing well, it’s unrecognizable,” Maddon said. “But under the circumstances, what we’re doing right now, it becomes more recognizable. We’ve got to figure it out quickly.”

It was the second shutout this season for the Rangers, who won the opener at their new stadium 1-0 over Colorado just over two weeks ago. Los Angeles was held scoreless for the second time in this shortened 60-game season.

Gallo went the opposite way in the sixth off Patrick Sandoval (0-1), the line shot landing in the Angels bullpen in left-center field. All four of Gallo’s homers this season have come off left-handed pitchers.

That drive ended an 0-for-10 slide for Gallo that included eight strikeouts, including his first at-bat against Sandoval.

“It was affecting me for sure. I felt like I had to manipulate my swing a little bit,” said Gallo, whose wrist started bothering him in the series opener at Oakland on Tuesday night. “I felt a lot better today, felt like I could get my normal swing off.”

Volquez was 4-8 for Miami in 2017 before Tommy John surgery, but returned as a free agent to Texas, where he spent 2018 rehabbing and then spent much of last season on the injured list with elbow issues. The 37-year-old right-hander, who made his big league debut for Texas in 2005, had indicated he might retire after last season before deciding to pitch another year.

Allard, the youngest Rangers pitcher, struck out six and walked one while throwing 94 pitches five days before his 23rd birthday. It was the right-hander’s second start filling in the rotation spot of two-time AL Cy Young winner Corey Kluber, who went on the 45-day injured list with a torn muscle in his shoulder after throwing only one inning.

Sandoval, who was on the Angels’ taxi squad before being recalled to make the start, struck out four and walked one in six innings. The 23-year-old left-hander’s 11 consecutive starts without a win to begin his big league career is the longest streak in team history, though only one big swing by the Rangers really hurt him.

“I felt I had command of most of my pitches today,” Sandoval said. “A lot of positives to take from this.”

New Angels 3B Anthony Rendon is hitless in his last 18 at-bats and is hitting .111 this season. “I know how good he is. He’s going to get blazing hot because the numbers will come back," Maddon said. “There’s a lot of good offense in store for us from him." ... Rangers 2B Rougned Odor has gone 17 at-bats without a hit, a stretch that includes nine strikeouts.

Angels: Maddon said SS Andrelton Simmons (left ankle) is “getting better” but still doesn’t have a timetable on when he will be back. Simmons has been on the injured list since July 28.

Rangers: CF Danny Santana (right forearm strain) is eligible to come off the injured list Sunday, but Woodward said the versatile Santana was still “two or three days away from maybe throwing where we’d feel comfortable even putting him at first base.”